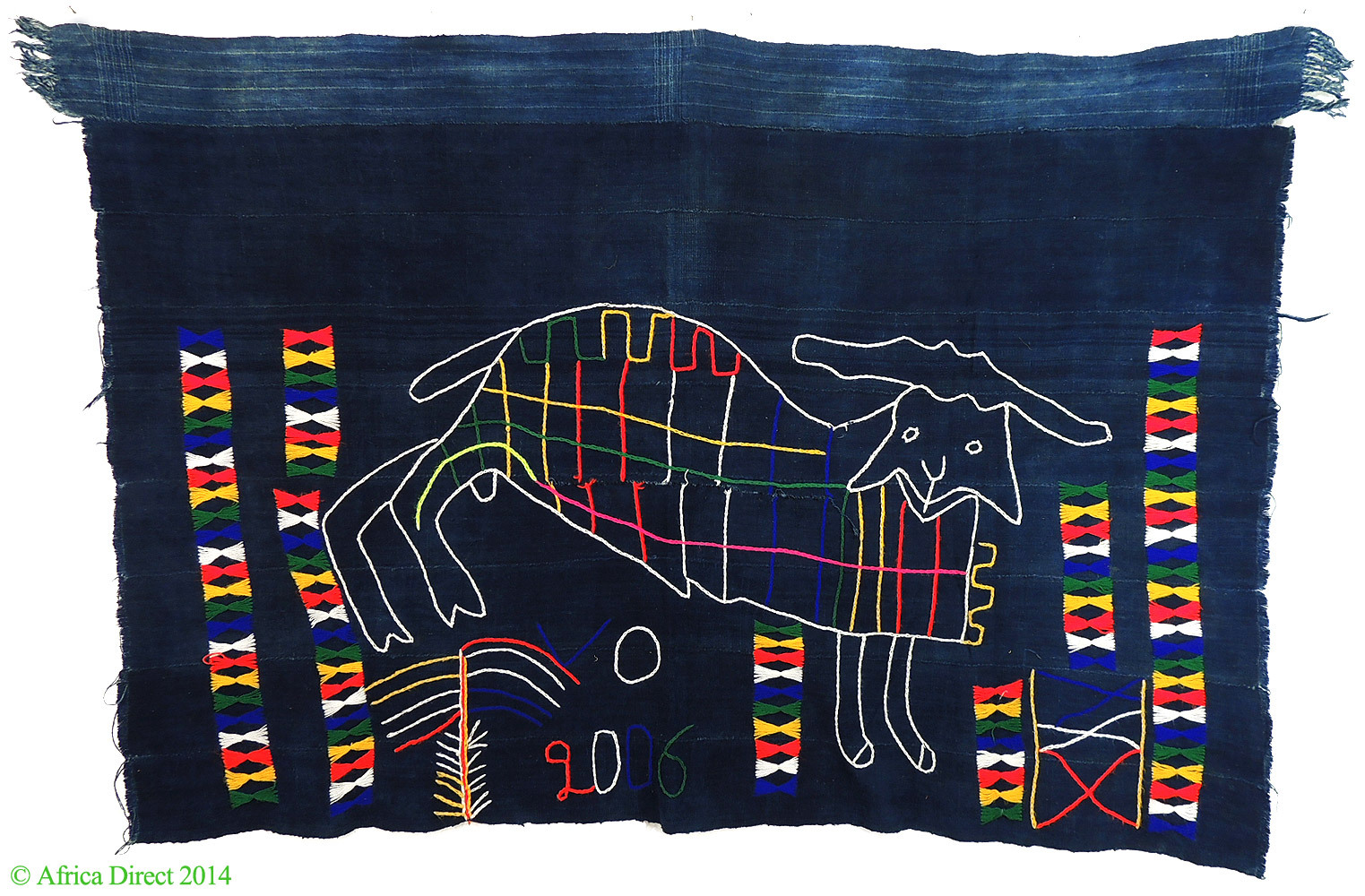 There are cultures in every corner of the African continent that used indigo to dye textiles. And the history of indigo dying in Africa is extensive: in the 1850s the Hausa city of Kano (now in Nigeria) was reported to have over two thousand dye pits in use! Traditionally indigo dyes were made using plants and prized for their rarity. But since the early 1900’s the vast majority of dye has been synthetically made. The difference in color is almost indistinguishable. Coloring textiles after they are woven is a departure from the conventional dying of threads to create patterns of pigment in the final product. With so many cultures far and wide participating in the coloring of textiles for trade, there are countless methods and conventions which result in varying looks in the final products. 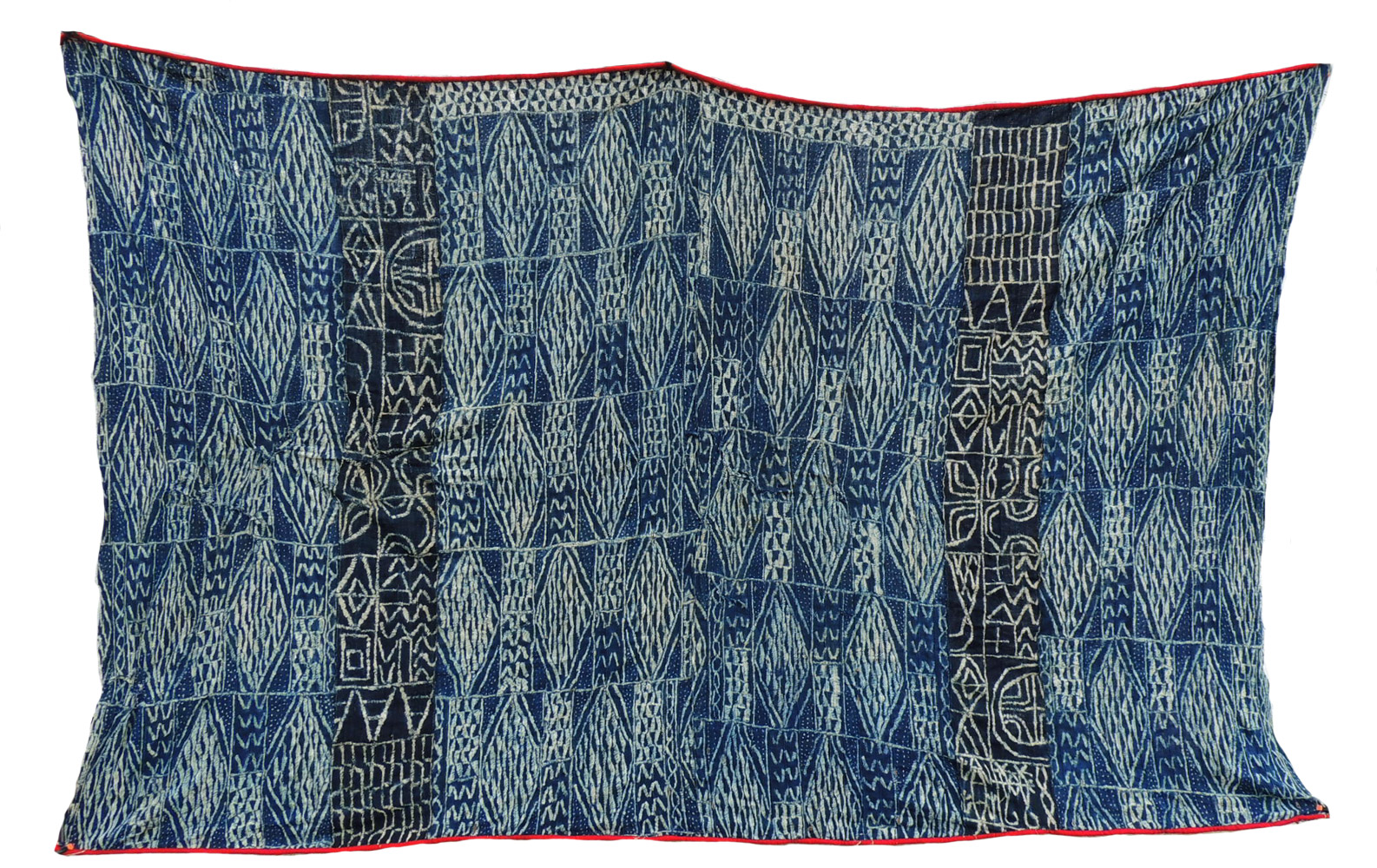 The most commonly identifiable indigo textile is the Yoruba cotton cloth called adire. They can be made with one of two materials providing the dye resistance: raffia grass or starch paste. Adire eleko cloths, made using starch, are recognizable by the ornate freehand designs employed. The shapes often include abstract and geometric patterns, words, phrases and animal motifs. A Yoruba textile artist (while men generally do the weaving, the Yoruba generally reserve dye work for women) will draw with a starch paste on one side of the stretched textile before dunking it in the dark blue dye several times. Hand cut stencils, usually depicting words and cut from stone, have also been employed in the adire eleko process. Alternatively, to create an adire oniko using raffia grass, the artist uses raffia to tie tight crimps around stones or other objects in order to resist the color’s movement during the dying process.

The Bamileke of Cameroon also create a remarkable indigo dyed fabric, and it’s likely they adopted the technique from the Yoruba long ago. The ndop fabric is generally made of stripwoven cotton, sourced locally; it is a stiffer, rougher cloth than the Yoruba predecessor. Bamileke women stitch tight patterned patches of raffia grass into the fabric before dipping in the dye pits. After several dye and dry cycles, the grass patches are cut loose revealing intricate geometric designs and symbols. Small cuts of ndop are often used as dance skirts or cut into shirts. Large cloths are uses as window coverings or wall decorations. 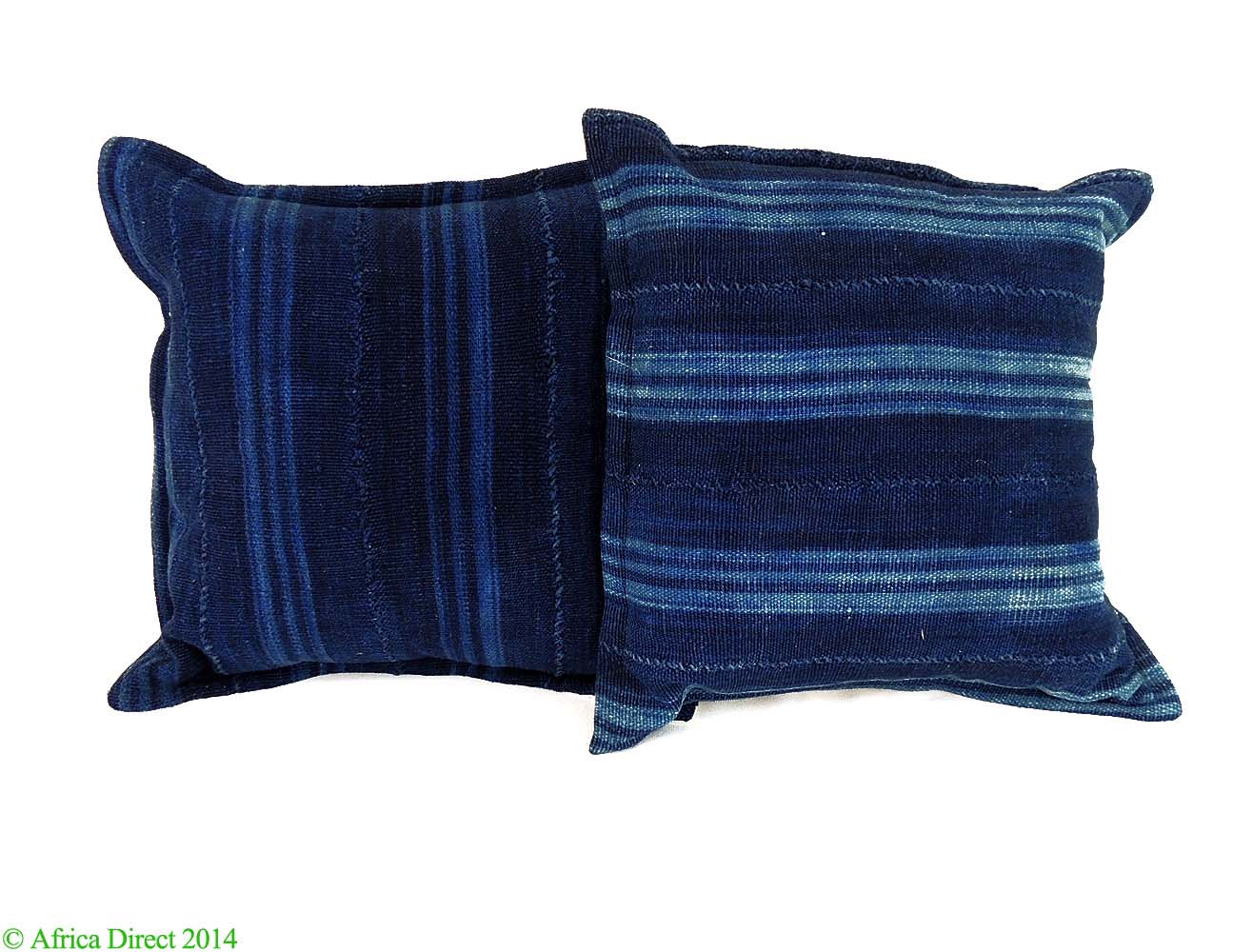 Pillows: a modern use for a legendary textile

Other cultures create indigo cloths that are not very well known outside of Africa. The Hausa, who reserve the task of dying cloth for men, are known for their specialty indigo turban cloth, prized throughout the Sahara region for the deep color and shiny appearance. The shiny surface is achieved by beating the colored and dried cloth with a wooden stick or mallet. A Gambian artist would likely carefully crumple the cloth before dying, giving a marbled look to the final product. Bamana artists in Mali use a process called “discharge dye” that produces similar results using a yellow dye. And even the famed Kuba artists of the Cameroon grasslands use tie-dye to create spirals and other geometric adornments on their grass textiles.

Mossi examples are also found in the indigo textile category on AfricaDirect.com; they are a style that is widely available as of late. The rectangular cloths, hand stitched of thin strips, are generally used as skirts by Mossi women in Mali. Peoples in Burkina Faso have also found a method to create and a use for these wonderful fabrics. Cultures far and wide have adopted the blue dying conventions over the centuries. These flowing works of art are appreciated the world over for their beauty, creativity, and history. Sources, for more information: Gillow, John. "African Textiles." Alibris. Chronicle Books, n.d. Web. 30 July 2015. Picton, John, and John Mack. African Textiles: New York: Harper & Row Publishers, 1989. Print. Picton, John, and Rayda Becker. The Art of African Textiles: Technology, Tradition, and Lurex. London: Barbican Art Gallery, 1995. Print.