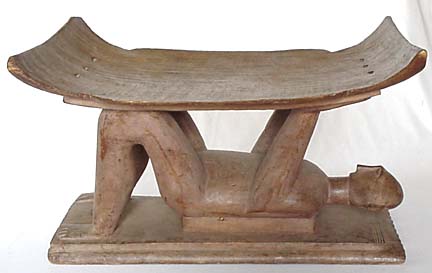 The Asante are famed throughout the world for their finely crafted stools, historically traced to the mythical "Golden Stool." The original (reportedly) gold stool, kept under tight security, is still used when a new Asantehene is elected, but no one is allowed to touch it. Though the Golden Stool is more historically important, it is actually the wooden stool which truly honors the power and continuity of the throne. Asante stools feature elegant, curved seats mounted on a variety of finely crafted symbolic designs and animals, usually associated with an Asante proverb. In addition to stools, the Asante are known for their glorious "kente" textiles. Kente cloths, worn during important festivities by both men and women, are finely woven and usually rectangular in shape. The colors most frequently used are red, blue, and orange, woven into strips and pieced together into an array of abstract patterns of stunning beauty. Kente weaving is so tight and skillful that the fabric is virtually impossible to tear. Other highly-collected forms are the cast "goldweights," developed for utilitarian use in the gold trade . These weights, usually made from brass, can be traced back 600 years. The earliest ones feature geometric shapes and designs, followed later by figural and animal weights in a great diversity of styles. Also popular, even ubiquitous, are the wooden female dolls, known as "akua'ba," carried by Asante women to promote fertility. These T-shaped, minimalist carvings are so well-known that when most people think of African Art, an akua'ba image comes to mind. In addition to their better-known works, the Asante produce elaborate chief's chairs and drums, and large cast vessels, jewelry and amulets in a variety of metals, gold included.

History: The Asante are members of the ancient Akan group, out of which many cultures from Ghana and the Ivory Coast can be traced. The mining of gold in the heavily forested parts of central Ghana helped establish the Akan as well as their decendants, who not only held sway over the gold fields, but the vital trade routes as well. The Asante Kingdom rose to power in this area around the turn of the 18thC, when a number of smaller Akan states fought collectively to achieve their freedom from the Denkyira. Asante legend holds that a golden stool descended from heaven to rest on the knees of its first ruler, or Asantehene, Osei Tutu. Tutu was guided by the priest Anokye, who reportedly is the one who actually crafted the stool that exists today. This stool and its magical powers thus became central to the creation of the Akan Confederacy, of which the Asante were the most powerful. They dominated the region for the next 200 years, and are still a strong political force. Today in fact, the national government in Ghana incorporates the powerful Asantehene and his local chiefs, who play vital roles in interpreting and enforcing the rule of law in the villages. This coalition-type government helps explain the relatively peaceful conditions found in Ghana through the years.