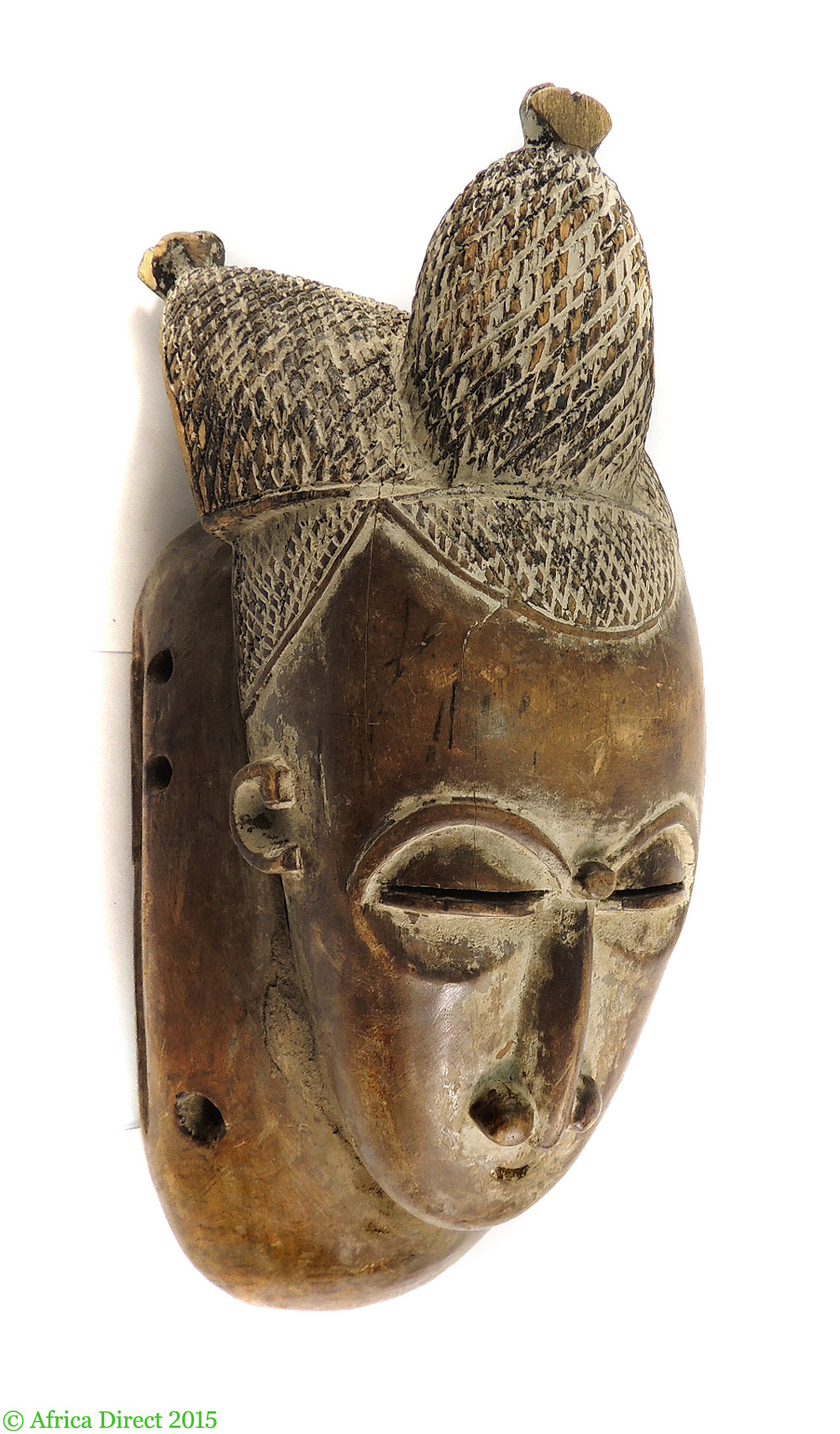 Arts: The Baule excel in a wide variety of artforms known the world over. They produce many types of masks, some realistic and serene, some highly abstract. Their statues, from the elegant, naturalistic "spirit spouses," to the dramatic, menacing and highly sought-after "medicant monkey" figures, show the ranges of creativity inherent among their artists. They are also noted for the elaborate decoration of many everyday objects, from doors, canes and jewelry to heddle pulleys and colorful "colon" statues, carved for the tourist trade since the end of the 19th century.

Baule statuary is dominated by elaborate figures carved to symbolize "spirit spouses." Baule mythology dictates that every adult, male or female, has such a spouse, manifested through dreams. These dreams are embodied in the "Blolo Bla," male, and "Blolo Bian," female, statues. Once carved, the statues are empowered by the diviner, and kept in the owner's house for magical and religious purposes. Many of these famous figures are stunningly beautiful, with mesmerizing facial expressions, detailed scarification and exaggerated coiffures, all carved in a precise and tight overall structure, with little excess. In addition to the realistic spirit spouse carvings, there are also wild-looking and even menacing monkey statues, usually quite large, with bared teeth, and cups held in the front in a position of submission. Often, these so-called "mendicant monkies" are encrusted with the sacrificial blood of chickens or dogs. The exact purpose of these spectacular statues is unknown, but they are thought to be used in blacksmith cults. Baule statuary varies greatly in size and quality, and is still being produced today. The masking traditions of the Baule are also extensive. There are basically two styles of masks used: naturalistic ones, often with oily black patinas and expressions of calm repose, and zoomorphic masks, sometimes quite large, representing either a ram, antelope or buffalo. Notable among the animal-forms are the striking "goli" masks, which can be carved in the shape of an animal head, or more frequently, employ an enormous, rounded, abstract face, with bulging eyes and a pair of smallish horns. These masks, used in agricultural rites, are often brightly painted, and are extremely popular with collectors. The decoration of utilitarian objects is also an important part of Baule expression, and there are many small masterpieces, particularly heddle pulleys, cast metal pendants and containers, similar to those of other Akan groups, and canes, tappers and wooden ointment boxes.

History: The Baule are members of the Akan peoples, who inhabit Ghana and Côte d'Ivoire. During the 18th century, the Baule people migrated westward from Ghana when the Asante rose to power. The story of how they managed to break away from them has been preserved in their oral traditions. During the emergence of the Asante, the Baule queen, Aura Poku, was in direct conflict with the Asante king, and when the Asante prevailed, the queen led her people away to the land they now occupy. Baule mythology holds that she had to sacrifice her son to the river god in order to complete the exodus safely. The male descendant of Aura Poku still lives in the palace she established, and is honored by the Baule as their symbolic king. The Baule today are the most powerful group in Cote d'Ivoire, admired as highly skilled politicians, as well as talented artists, who have produced some of the most elegant objects known in West Africa.