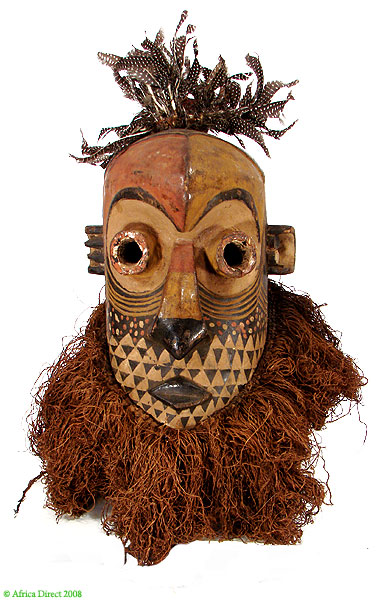 Arts and History: The Biombo live just to the south of the confluence of the Lulua and Kasai Rivers, and mingle with both the Kuba, their relatives, and the Eastern Pende, who have jointly influenced the appearance of their masks. Reportedly they use their masks during or after circumcision ceremonies, though documented rituals and their history are virtually unknown. Their masks show both Pende and Kuba influence, but most have a rather unique style, distinct from that of their neighbors. The rounded, protruding mouth is a feature of most Biombo masks, and helps tremendously in what are admittedly tough attributions. Many of their masks, which come in both helmet and "face" forms, also have one or more projections extending from the top of the head. The most common number found is three. The face is often covered with red "tukula" powder, made from the camwood tree, obtained in trade from the Mbala. Triangular incising and a contrast in colors are common features of both the Eastern Pende and Kuba, and has led to many Biombo works being misidentified, as they use similar decorative elements. See Cornet's A SURVEY OF ZAIREAN ART.