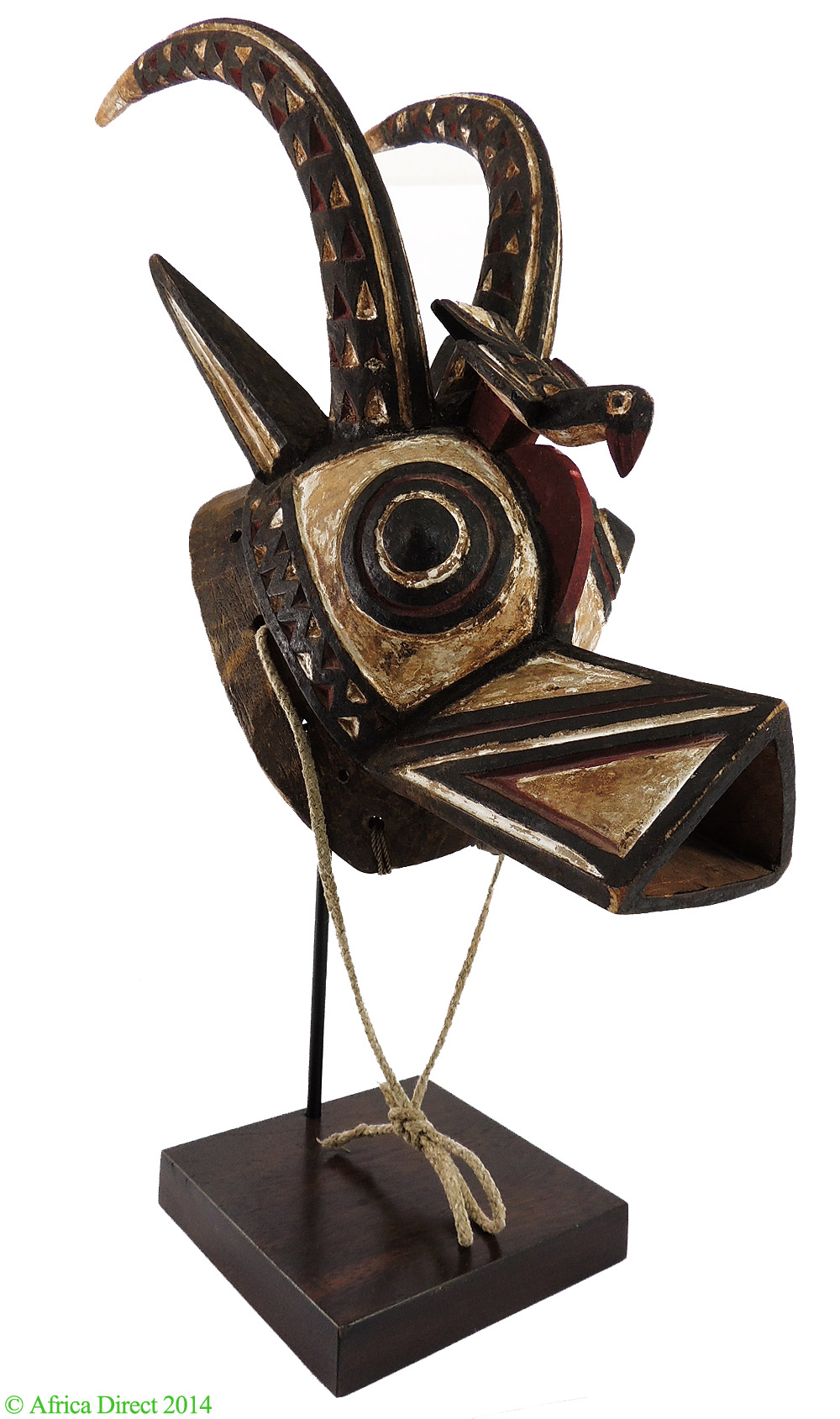 
Arts: Though the Bwa are not related by lineage to the Mossi, their wood carvings follow similar stylistic guidelines. with soaring vertical plank masks and animal masks, associated with the "Cult of Do." Roy writes: " The Bwa believe that the world was created by God, named Difini, or Dobweni, who abandoned man and left the earth when he was wounded by a woman pounding millet with her pestle. To act as his representative among man and as an intermediary between man and the forces of nature, Dobweni sent his son, Do. Although Do is androgynous, both male and female, it is most frequently represented as male. Do represents the bush and its life-giving force, for the Bwa still depend on the bush for game and gathered food. He shows himself as the source of plant life and the power that gives fruit to man's work in the fields. Do is concerned with ceremonies that insure the renewal of life." Plank masks employ the dramatic geometric incising found throughout the region. Dance masks fall into two categories, the extraordinary face masks, which feature an abstract round face with a triangular or diamond-shaped mouth, through which the dancer sees, an impressive downward-sweeping hook, and painted circular and checkerboard decorations. All of these patterns have ritual and totemic significance. The face masks include a soaring vertical plank, likewise decorated with a variety of curving and geometric motifs. The topmost portion of the mask is often a graceful downward curve, not strictly horizontal. The second type of mask, of which there are many individual types, are the animal masks. Unlike the rather static, two-dimensional plank face masks, these can be quite dynamic, even stunning. A variety of animals are rather realistically depicted, and including the antelope, buffalo, serpent, rooster, hawks, butterflies, fish, hyenas, and crocodiles. These serve to teach and inspire initiates. The familiar winged "butterfly" masks have a series of eight circles spread four to each side. They are often confused with the hawk mask, which replaces circles with colorful triangular and linear patterns. About the significance of the geometric decorations, Roy adds: "Initiates learn the meanings of the geometric signs that cover the masks from the elders, who use the masks themselves as models, and also use rectangular boards on which the same signs have been painted. Initially, each of the signs is explained independently of other signs, using didactic boards. Then the meanings of the assembled signs on specific plank masks are explained. Here the combination of signs communicates a moral or historical lesson that is an essential part of the initiation. These lessons describe the virtues of the ideal, respected member of the community, and the dangers of straying from the path of social behavior marked out by the ancestors. They also illustrate the myths of the founding of the clans." Another significant mask form, the "leaf" mask, is used by the Bwa, but since it is made entirely of vegetal materials, never survives long enough to be collectible. Like wooden masks, they are associated with the Cult of Do. Geography plays a significant role in mask type, the northern Bwa use mostly leaf masks, while southern Bwa lean towards the many wooden forms. Though figures have been reported, they haven't been seen on the market in years. Attribution of Bwa masks is not difficult, if studied carefully, section by section.

History: Though their distant roots are unknown, this Voltaic group has resided in central Burkina Faso and eastern Mali at least three hundred years. They have been repeatedly invaded, primarily because they live in scattered small villages not easily defended. In the 18th century, the Segou Bamana occupied large areas of Bwa territory. This was a difficult period for the Bwa, who were forced to pay taxes and tributes to their Bamana captors. The decline of the Bamana Empire was replaced by the infamous Muslim Fulani cavalry, who destroyed crops, slaughtered animals, enslaved both men and women, and forced many of the men to join their army. The arrival of the French brought little relief to the Bwa, as they conspired with the Fulani to tighten their grip. By 1915 the Bwa as a people were virtually extinct, yet somehow the few who survived managed to reestablish themselves. They continue to be a vibrant culture to this day, and produce masks treasured throughout the world.