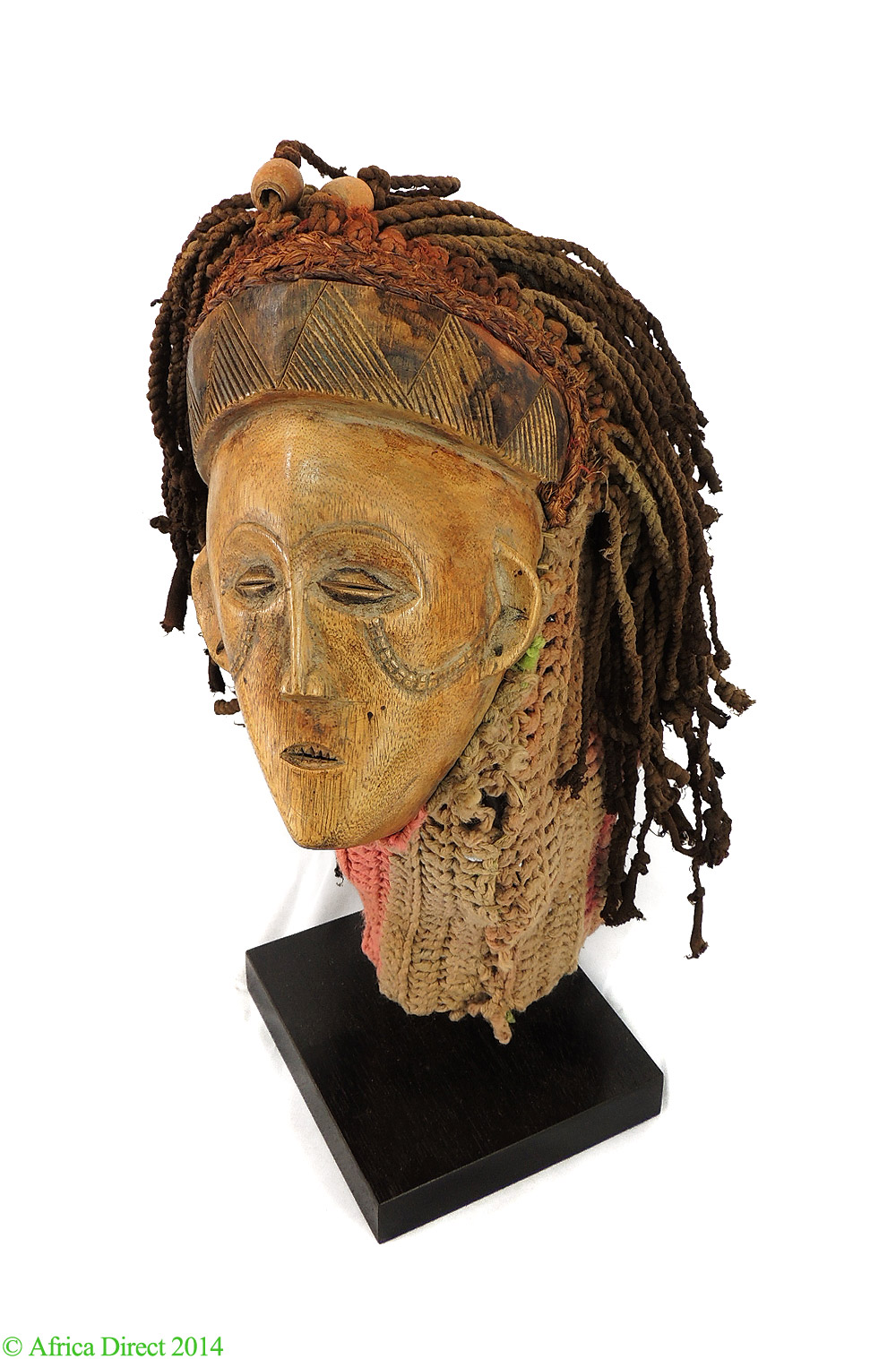 Arts: The most recognizeable and numerous of the Chockwe arts are masks, which consist of three main forms: The "pwo" female masks, with their elegant, distinctive scarification, and elaborate woven headpieces; the "cihongo," a highly-distinctive male mask with a horizontal beard, fierce expression, and large globular eyes; and the rare "cikungu," which is made entirely of vegetal fibers and cloth, and covered with polychrome pigments. Chockwe statuary primarlily revolves around the famous, and stylistically exaggerated "tshibinda Ilunga" figures, as well as smaller ancestor carvings, usually female. Skillfully-executed everyday objects are known also, including large, intricately-carved chairs, pipes, whistles, combs, boxes, stools and spoons.

Chockwe art is a royal art, devoted primarily to prestige objects produced for the court. The social importance of these arts is demonstrated by the fact that professional carvers are often employed to create them. The Chockwe masking tradition is an impressive one, with many masterpieces in major collections. The predominant mask-form is the "pwo" mask, which celebrates the ideal mother and woman. It is danced to promote fertility, and also for celebrations surrounding initiations. These masks are characterized by a cruciform on the forehead, narrowed slits for eyes, and a warm, brown patina. Often there is an elaborate woven headdress attached so that the mask can be worn, and this headgear can sometimes be more impressive than the mask. Though the "pwo" is the most familiar Chockwe mask, it is not the most important. That role is filled by the rare "cikungu," a complex, body-suit type creation consisting entirely of vegetable fibers and cloth, carefully painted with black, white and red pigments. This remarkable mask is used only for the most important occasions, like "Mukanga" initiation ceremonies and the investiture of a new chief. It is also danced to remove curses from the village, and is considered sacred. The second most powerful of the Chockwe masks is the bizarre "cihongo," a male mask used in judiciary ceremonies. It features a stylized horizontal "beard," as well as a wide mouth with teeth bared and whitened for emphasis. It is popular with collectors, but varies greatly in quality. Statuary mainly consists of two forms. The most recognized and significant are the familiar, over-the-top "tshibinda ilunga" statues, which represent their mythical Luba ancestor. These large, male statues have enormous, sweeping hairdos on top of an enlarged head, with huge open hands, often displayed in a welcoming fashion. At their best, these statues are among of the most dynamic of all ethnic creations. Less common, though still significant are the smaller female statues, which are less formal and more serene. These are thought to represent queens, or important ancestors, and are used to celebrate and promote fertility. Chokwe carvers devote an enormous amount of time to smaller, utilitarian objects, again most frequently for use or display by the royal court. Though statues and masks predominate, many Chockwe masterpieces fall into this category. Among them are enormous chairs with figural adornment, finely-carved stools similar in style to those produced by the Luba, and magnificent, globular whistles. Other items include ritual spoons, combs, thumb pianos, and stunning boxes, frequently showing influence from cultures to the north in the DRC.

History: The Chockwe are thought to be descended from the Mbuti and Mbundu pygmies, although this link has not been firmly established. We can, however, trace them back with certainty to the old Lunda Empire. We know they suffered under Lunda domination as early as 1600, and their territory was firmly established in central Angola during this time. Over the centuries, colonialism, wars, disease and famine resulted in the fragmentation of the Chockwe into the smaller, more isolated groups we find today. Relatives of the Chockwe include the Lwena, the Songo and the Ovimbundu, and their artworks bear strong evidence of Chockwe origin.