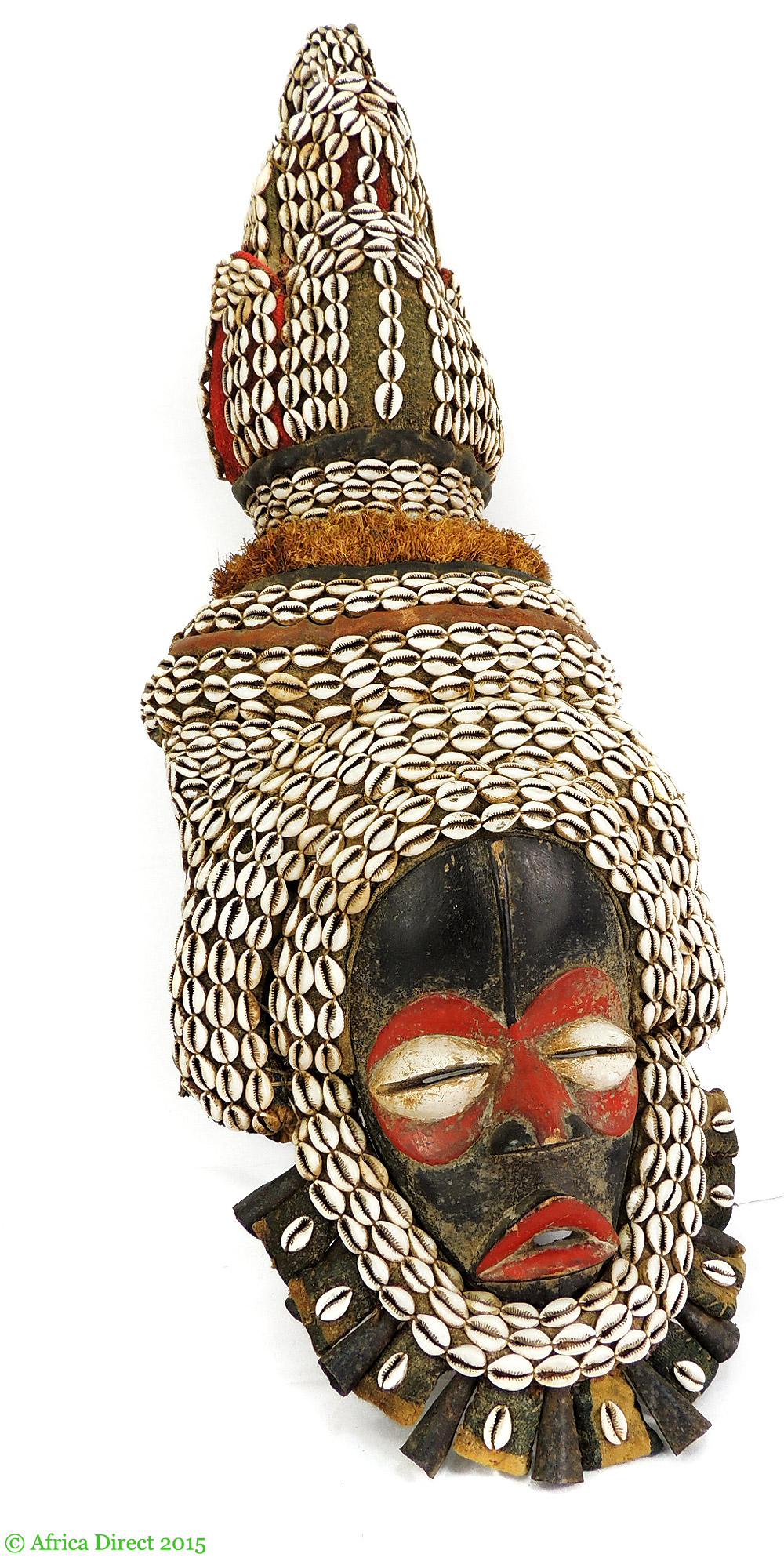 Arts: The considerable reputation of the Dan in the artworld is based almost entirely on their output of beautiful and expressive masks. The masks are fairly uniform in style, and most often are found in two sizes: large face masks used for dances and festivals, and tiny "passport" masks kept as personal talismans. The Dan also produce fine, figural "hospitality" spoons, and elaborate wooden "mancala" games, a popular pastime throughout much of West Africa. Though somewhat unexpected, the Dan produce very little in the way of formal statuary, and the few statues that exist are usually female and thought to represent "favorite" wives. Utilitarian objects are either rare, or not distinct enough to attribute.

Though evaluation of any artform is necessarily subjective, it is safe to say that the best masks of the Dan are some of the most sublime utterances in the history of plastic art. Just as amazing are the sheer numbers of high-quality masks. Obviously, every mask cannot be a masterpiece, but as a rule a Dan mask will be beautiful, something that cannot be said about other masking traditions. Historically, the number of occasions for masked dances was enormous, with masks carved for a variety of purposes, from education, to competition, to war, to social and legal regulation. Today, due to the upheavals of the past three centuries, and severe changes in how the Dan earn their living, the use of masks has been relegated to festivals, and other ceremonies that are mostly for entertainment. The old names and uses of the different masks are now known only by a handful of elders, and actual dances of ritual importance are rare. Partially to blame for the loss of the "old ways" is the recent rise to power of the "Leopard" Society, which has increasingly usurped the authority of diviners and local chiefs to manage initiations and other village affairs. Today, though some like to assign academic names, the masks are generally found in two forms: larger masks, either male or female, used mostly for entertainment, and the smaller "ma" masks, tiny replicas of larger masks, which are carried as talismans by villagers for protection when they are away from home. These small masks can also be remarkably beautiful. Though the masking tradition of the Dan is predominant, there are a few other notable forms. Of particular interest are the lovely and elegant "hospitality" spoons, presented to highly-respected women who have demonstrated their generosity and warmth towards family and visitors. These utensils, frequently carved with figural handles, are used to dish out food at feasts, and are a source of great pride for their owners. The Dan also excel at a popular game of count and capture called "mancala." The large "game boards," which usually have six depressions on each side and single depressions on each end, are frequently decorated with animal or human heads, and are highly decorative and popular with collectors. The abundance of statues and identifiable utilitarian objects, common in most African cultures, is absent among the Dan. The statues that exist, often quite beautiful, are usually female and are thought to be portrait statues of the favored wives of important village leaders. They are only rarely encountered however. The usually abundant utilitarian objects so frequently found in other groups are thought to be rare among the Dan, though it might just be that they are plain and hard to identify. The art of the Dan has undeniably enriched our existence.

History: The Dan, historically a warrior people, are thought to have been in the Ivory Coast area for perhaps two thousand years, though the evidence for this is scant. It is known however that the Dan were heavily preyed upon by slave raiders in the 17/18th century, and the creation of Liberia in 1847 was marked by the repatriation of large numbers of them. These returning ex-slaves eventually outnumbered their relatives in the Ivory Coast, and that is still the case today. The Dan have no centralized government, and each village is relatively autonomous. The ability to accumulate wealth and prove one's ability are highly prized by Dan society, and the belief is known as the "tin." This social system still exists today, though the ways to gain wealth and prestige have changed, from prowess in agriculture and hunting, to success in the diamond mines and rubber plantations.