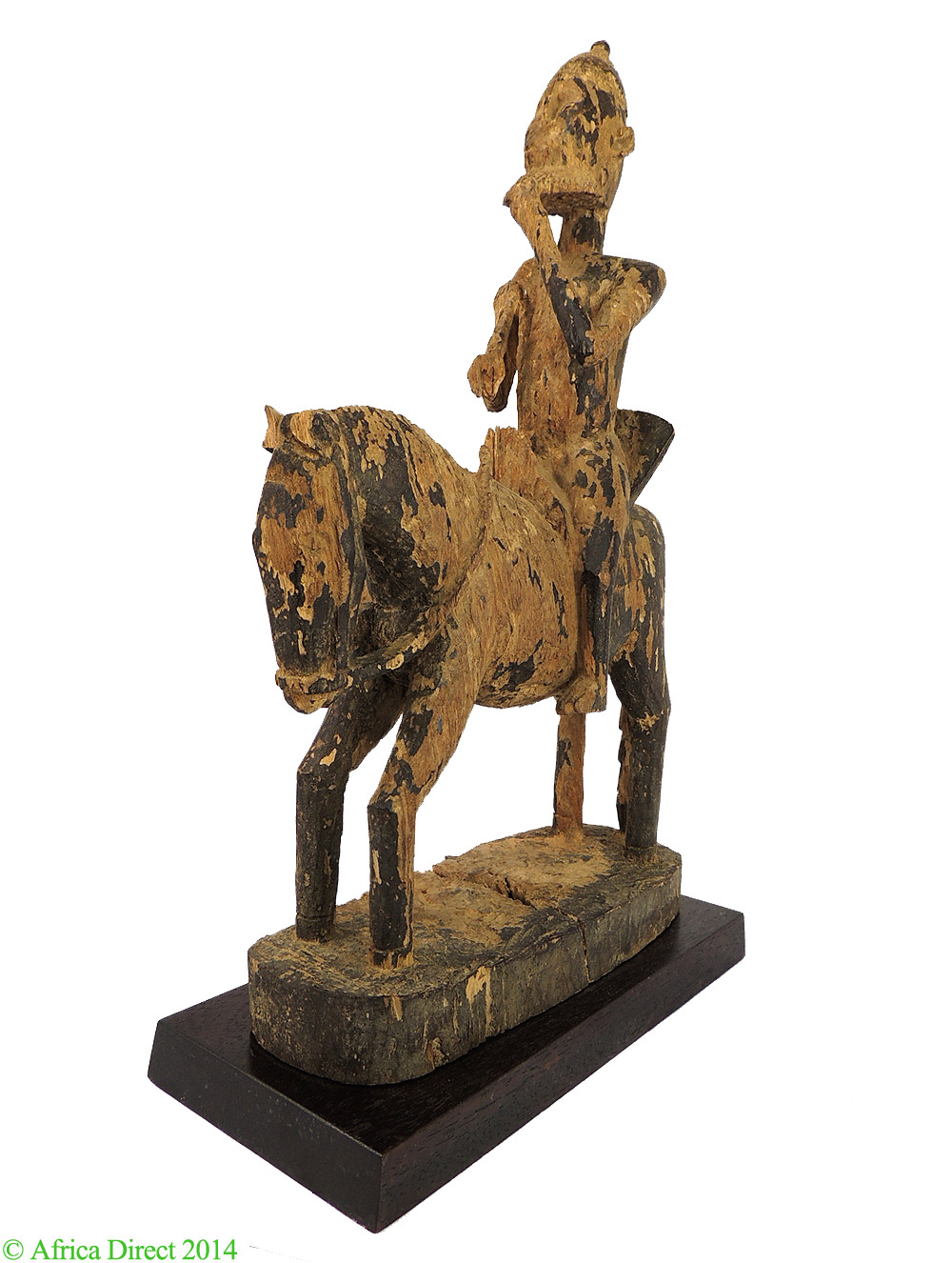 Art: The Dogon, a complex and spiritual people, have a blithering array of ritual art objects. Though they have been studied by scholars for many years, the usage and naming of these artworks remains elusive. There are close to 100 different wooden masks, countless figural statuary sizes and forms, and innumerable smaller objects, from doorlocks to metal castings to jewelry to items that defy meaningful classification. Most of these artworks are associated with the staggering number of Dogon ceremonies and festivals, which are mostly off-limits to outsiders. The foundation of these ceremonies, from agricultural rites, to initiations to funerals and beyond, lies in the many myths absorbed by the Dogon during their ancient flight from northern Africa, perhaps Egypt, to their present location along the Bandiagara escarpment. The Dogon also have a powerful attachment to the natural world--from rocks to plants to the animals of the bush. More art--more mystery. Their creation myth revolves around a creator god named "Ammo" and his four pairs of offspring known as "nommo." Figural representations of the primordial pairs show up in artworks produced for virtually every Dogon ritual setting. There are names for some masks, mostly abstract and stylized, like the "kanaga," and "satimbe," and also many with totem animals associated with them, but the origin of the names is unknown, as is almost everything about Dogon art. Volumes have been written, but alas most is only scholarly speculation.

The most well-known artworks of the Dogon are their ceremonial masks, of which there are perhaps 100. A few of them have names, but it is somewhat doubtful that these are Dogon names. It is more likely, since the Dogon are secretive about actual meanings, that these are European names. A good example is the "kanaga" mask, an impressive vertical creation with an abstract geometric face and a large, stick-man like superstructure. A search of the literature under the word "kanaga," which may indeed be a Dogon word, gives a range of meanings. The most familiar, and the most unlikely, is the "Cross of Lorraine," a double-bar Christian cross which can be traced back to Byzantine times. If you see a depiction of this cross, it
is readily apparent that the cross and the Dogon symbol on the "kanaga" mask are totally unrelated, yet another failed attempt by missionaries to put a Christian spin on a "pagan" animist symbol. The "kanaga" has also been described as a bird known as "kommolo
tebu," and a crocodile. Only the Dogon know for sure, but it is almost certain that the "figure" on top represents one of the primordial beings who spawned the Dogon. Other abstract masks, many with lively polychrome paints and amazing cubist designs, represent various totem animals like antelopes, hyenas, birds, and others plains animals. The highly spiritual Dogon believe that the spirits of humans and animals and even rocks and plants are intertwined, so it is not surprising that there are so many styles of masks. There are also more realistic masks, resembling those of the Bamana, used mostly for funerals. Another named mask is the "satimbe," a cubist mask with an imposing female figure on the top, thought to represent an ancient female ancestor. Any serious effort to give actual Dogon names for masks which are secret and sacred would end in failure. In addition to masks, the Dogon produce an enormous number of impressive statues. Unlike the variety found in masks, Dogon statuary is fairly uniform, and at times is difficult to distinguish from those of their neighbors the Bamana. They usually feature a somewhat bent posture, with female figures having pointed breasts and male figures a stylized beard. These statues are associated with the "nommo" and are used for an enormous variety of functions by priests and elders. They are kept in special shrines, mud huts that can be works of art themselves. There are also wooden "dog" figures produced in honor of a mythical dog who saved the Dogon from dying of thirst. In the best Dogon tradition, this animal has also been described as a horse by scholars. Less formal objects of the Dogon can also be of great, if primitive, beauty. These include the simple but dramatic doorlocks, cast brass and bronze jewelry, often with a "nommo" connection, and horse and rider figures.

History: Dogon history and the Dogon Creation Myth are totally inseparable, although a few rough dates can be discussed with some certainty. It is thought that the Dogon originated along the west bank of the Niger River, and this can be documented back to the 10thC, although some scholars can present convincing evidence for a far earlier date, perhaps to Egyptian Pre-Dynastic time over 5000 years ago. During the 10th to the 13thC the Dogon moved into northern Burkina Faso, where they were known as the "kibsi." Around 1490, they fled this region because of Mossi invaders trying to absorb them into their kingdom. While most Dogon did escape, some remained and exist today as the "nyonyose." Fleeing the Mossi horsemen, the Dogon found a perfect place to avoid their pursuers, a hostile 150 mile long escarpment known as the hills of Bandiagara. Here they live today, barely moved by the will of outsiders. Their homelands, designated a World Heritage Site, are a cultural treasure to be cherished by the entire world. Though famed for their carvings, even their mud and stick architecture is amazingly beautiful. Combined with the Dogon's famed hospitality, lucky visitors encountering a Dogon village must wonder if they have indeed discovered a "magic kingdom."