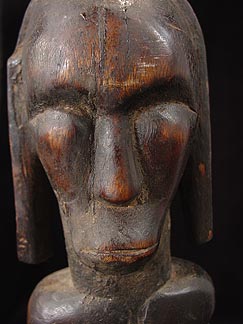 Arts: The sculptures of the Fang are some of the most famous in all the collecting world. They attained this lofty position based almost entirely upon their "byeri" reliquary heads and figures. The discovery of these haunting pieces by scholars and travelers during the last half of the 19th century helped elevate African art into the collecting mainstream among Europeans, and Fang heads became the earliest African carvings to fetch enormous prices at auction. Though there are other forms of note, like bellows, abstract, elongated masks, and prestige objects, the "byeri" dominate any discussion of Fang art. In fact, even smaller, lesser known objects are collected primarily because they often have figural representations which resemble byeri heads.

The famous "byeri" figures and heads were carved to serve as "guardians" for the skulls and long bones of revered male ancestors. Fang religion revolves around the worship of these ancestors, whose remains are stored in bark boxes upon which dramatically carved heads and figures are mounted. Though the heads reportedly are earlier than the full figures, this is not always the case, and may simply be a function of the forms that were collected and later exhibited during the earliest contacts with Europeans. The earliest theories were that heads were "portraits" of the ancestors, but since full figures may be either male or female it is now believed that they were placed over the bones to protect them from evil spirits. The heads and figures often have a magical, even sinister expression, and are often jet black from the application of oils and other libations. There are regional and clan-related stylistic differences, but their identification can be complicated. Whatever the sub-group might be, the characteristics of the faces, and the muscular torsos with their static postures are instantly identified with the Fang. Fang byeri have long been available on the market, though their quality varies greatly. The Fang, who inhabit dense forests, use slash and burn techniques, and thus move frequently. Though they will transport the ancestral bones from old village to new village, they will often release the byeri for sale, since the bones are sacred, not the carvings. In addition to the "byeri," the Fang produced a famous mask known as "ngil," which featured a long, abstract white face, and was used until the early 20thC for initiation ceremonies and for judicial proceedings. These striking masks are thought to have inspired some of the modernist paintings that emerged during the same time frame. Colonization by the French eventually put an end to the "ngil" dances. Another mask which has acquired its own name is the "ngontang" dance society mask, which features four faces on a helmet-style mask. These faces were also painted white, and were actually thought to symbolize white girls. Fang masks are still found today, though they are now used only for entertainment, having lost their ritual importance. Other known Fang artforms are some incredibly beautiful figural bellows, with byeri-like embellishments, and also spoons with figural decorations, used by men during initiations and magical ceremonies. The impact of the Fang in creating a wider appreciation for African art cannot be ignored and, despite the fact that their art has become quite common on the market, viewing one of their masterpieces can be a thrilling and memorable experience.

History: The Fang migrated from the northeast over the centuries into the scattered areas in which they live today. They were a fierce people, seizing lands and villages as they spread. Today they number around 80 clans and are spread over a vast area. This large geographic coverage and the isolation and autonomy of the individual clans has helped create the many artisitic sub-styles mentioned earlier. Each village is headed by a leader related to the founder of the village. They are mostly farmers, and ancestor worship continues to be the glue that binds each village together.