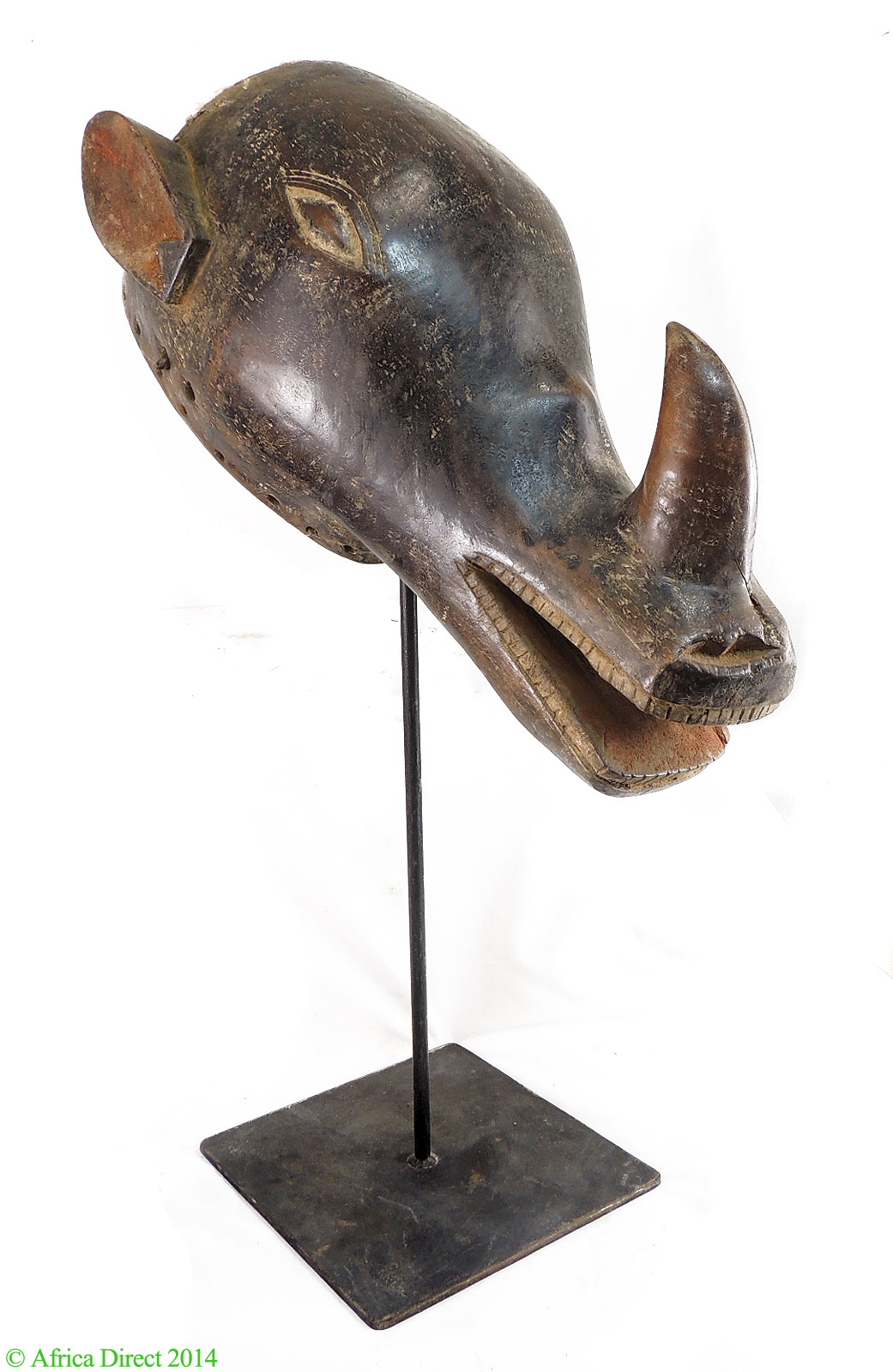 Arts: The Guro are well-known for their highly-decorated and colorful masks, which can be quite complex, combining human features with those of animals. There are also masks of more simple form which can be less colorful, and feature animal or human faces, without combining them. Masks are by far the most famous artform of the Guro, but not the only one. They have also produced some fine, but rare, standing figures, as well as famous and masterful heddle pulleys.

The numerous masks of the Guro have some characteristics which make them quite easy to identify, although some of the more refined and subtle ones can be confused with their neighbors the Baule and Yaure. Generally, Guro masks have a long face with pointed chin, often with elaborate animal or serpent superstructures/additions. The majority are covered with thick coats of polychrome paint, in a blithering array of colors. While some collectors find them garish and over-the-top, there are also many who are devoted admirers. They are favorites among decorators for instance, for both their color and size. Some of the masks can be well over 30 inches in length, so it is no surprise that they can be impressive and even stunning when hung on the wall. In addition to the large mixed-theme masks, there are a couple other types of note. In fact, the most beautiful masks from the Guro usually fall among these two forms. There are human form face masks, usually black, with refined, serene features. For perhaps the most famous Guro masterpiece, a human-form mask, see page 122 of Segy, "African Sculpture Speaks." There are also animal form masks, like the famous "zamble society" antelope mask, also pictured in Segy. Animal-form masks are common among the Guro, and their carvers use images from a wide variety of bush creatures. Though masks dominate Guro carvings, they have produced a few other forms that are noteworthy. Though formal statuary is rare, when found it is usually of high quality, probably because these pieces were made for placement in shrines for important ritual and historical purposes. They are also much more difficult to identify, as they closely resemble similar figures used by their neighbors. Lastly, the Guro have produced a large number of exquisite figural heddle pulleys which grace some of the finest collections. They can be heartstoppingly beautiful and rival in skill those of their neighbors the Baule and Senufo. The bulk of Guro art is produced for use by the "Je" Society, a group of elders and wealthy men who oversee almost all facets of Guro village life, from celebrations, to funerals, to agricultural and magical rites, to judicial proceedings. It is during these "Je" functions that the masks appear.

History: The Guro have lived in the western regions of the Ivory Coast for generations, having arrived from the north perhaps 700 years ago. They are from Mande stock, unlike their Akan neighbors. The Guro were originally known as the "Kweni," but during the brutal colonization by the French between 1906 and 1912 they were assigned the Baule name "guro." They exist primarily by farming cocoa, coffee and cotton, although more recently many Guro men and women have fled their traditional villages to join in the hunt for diamonds, which have recently been discovered up and down the west coast of Africa, including Cote d'Ivoire. These diamond fields exist in virtual anarchy, and resemble in some ways the Gold Rush of the 1840's in the United States. While a few might make a living, or perhaps strike it rich, the majority end up either broke or exploited, so many of the miners eventually give up and return to their villages.