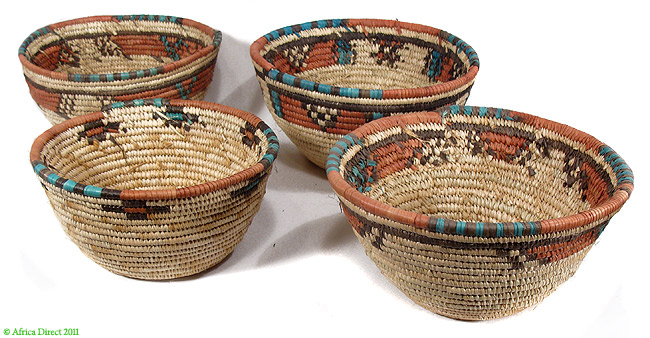 
Arts: Because the Hausa have been heavily Islamicized for many centuries, their sculptural output is almost non-existent. The Hausa do produce some fine woven textiles, primarily in the Kano State of Northern Nigeria, as well as exquisite, tightly-woven baskets. There are also a few examples of a strange hunting headdress which uses the beak of a hornbill, carried by the crouching men over their heads to fool potential game. Hausa men wear flowing embroidered robes called "riga," which are prized by collectors, and identified most often with the Hausa, but these textiles are not unique to the them and are, in fact, worn by several groups throughout the region.

History: Hausa mythology relates a primordial couple, Bayajidda and the "queen of Daura," giving birth to seven sons, who went on to found the seven traditional Hausa city-states. The rise of these states can be traced back to between 500AD and 700AD, with the Hausa reaching their zenith around 1200AD, when Arab Muslims began to heavily infiltrate Hausa villages and convert its residents. The Hausa eventually fell prey, like many groups throughout West Africa, to the marauding Fulani, who swept southward from the Sahel region on horseback, to be stopped, not by human opposition, but by the many diseases and oppressive humidity of the Congo and Cameroon rainforests. The Hausa today remain inextricably tied to their former captors, and many modern ethnologists, as well as the Nigerian government, describe this population area as "Hausa-Fulani."