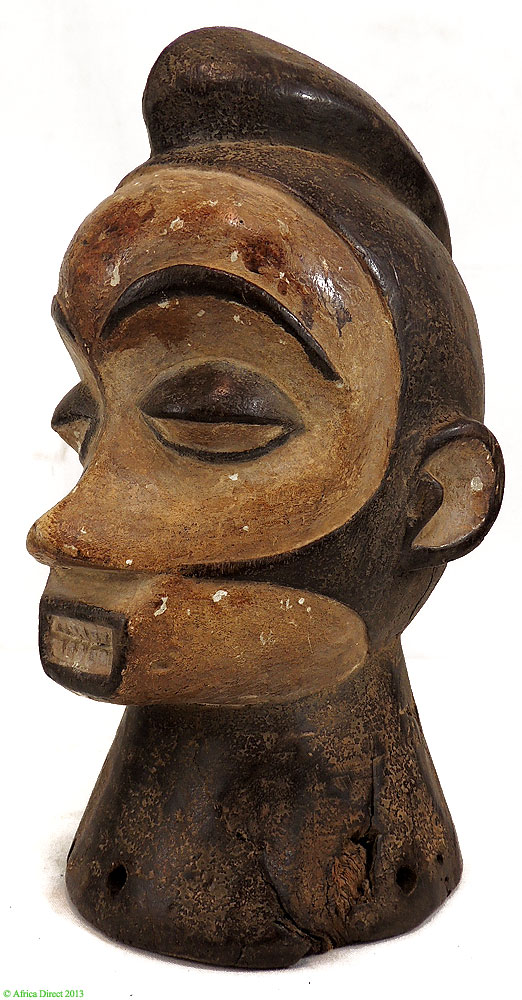 
Arts: The artworks of the Idoma primarily consist of masks with white, kaolin-covered faces, and large statues with faces which resemble the masks. Pieces from central Nigeria are often very difficult to identify, since among the Igbo, Ibibio and Idoma there is an enormous overlapping of styles, and even on occasion artists from one group will craft masks for others. The white-faced Idoma masks, though similar to those of the Igbo, are, however, fairly easy to attribute. They are often dramatic and expressive, with a startled look and bared teeth. White-faced masks are used by the Idoma primarily for funerals, as the color represents death. Idoma masks usually have a series of holes for the attachment of an elaborate costume, which hides the identity of the dancer. Statues, when found, tend to be quite large, like our example. While statues often have the white faces associated with masks, the use of polychrome pigments is not unusual. The veneration and protective importance of ancestors is perhaps the most prominent aspect of Idoma culture, and there are quite a few societies, some secret, whose practices are devoted to ancestral rites. Funerals are elaborate events, and the deaths of both men and women are handled with the highest reverence. At some point after the initial funeral rite, there is a "second burial," essentially a memorial service, to insure the smooth passage of the deceased into the mystical realm of the ancestors. Villagers, in turn, depend on these ancestors for priest-mediated advice, as well as protection. Both masks and figures are used in these ceremonies.

History: Based on linguistic evidence, being members of the "Kwa" group of languages, the Idoma have been in the general area of central Nigeria for thousands of years, although they did probably move from more northern regions at one time, along with their relatives the Yoruba, Bini, and Igbo. Assimilation between these groups has blurred the lines of ritual practice and, as previously stated, makes the precise identification of many pieces a difficult task. It also makes scholarly research on Idoma history a challenge.