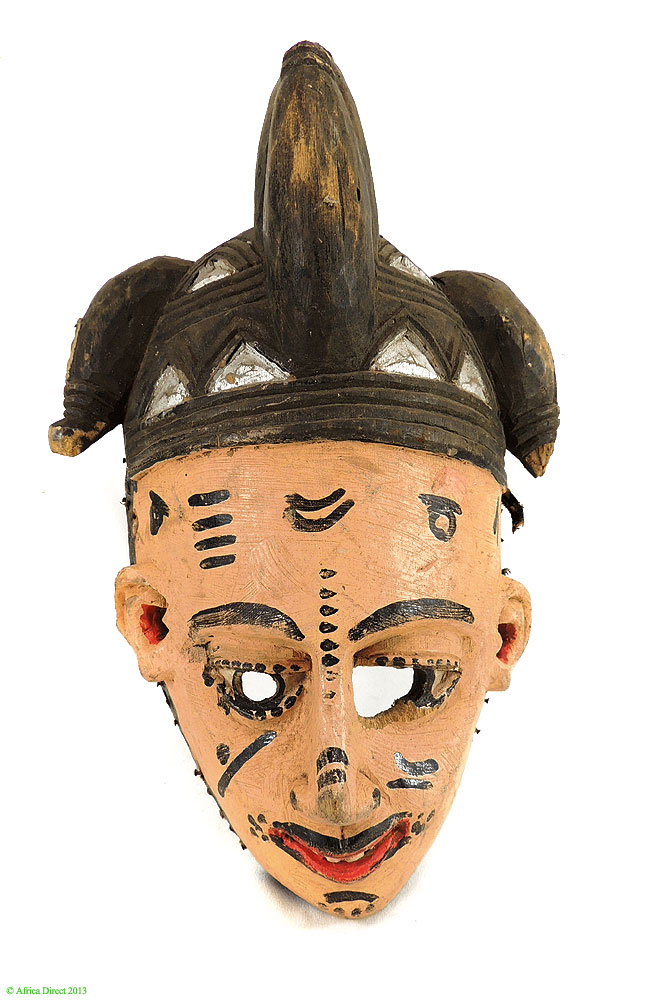 
Arts: A proper discussion of the vast scope of Igbo arts is not possible in such a limited forum. In fact, the diversity of this group makes any definitive, scholarly accounting virtually impossible. That being said, the Igbo produce perhaps the widest range of mask styles and forms in all the world. They have no serious rivals for this honor, although Nigeria in general seems to produce many of the most bizarre and confounding pieces of folk and ritual art of any nation. It isn't necessarily that individual Igbo masks are hard to attribute, though many are, it's just that defining a style which one can use consistently is daunting. There are a few Igbo masks that are common enough that they can be categorized, even named, like the "Maiden Spirit" masks, danced during "Mwo" Society rituals, but even these are used by some of their neighbors, like the Idoma and Ibibio. It is this sharing of rituals, and the endless variations of them, that produces so much confusion. Even carvers are shared across groups, as talent and the right price apparently can negate tribal affections.

Statuary is another matter, thankfully, although there are many forms in this realm as well. Here we find some surprisingly strict stylistic norms which can be counted on to be present in most works. These include a formal straight up posture, arms down by the body with palms outward, and an overall lack of any dynamic creativity. Though the number of statues types is quite large, when one thinks of an Igbo statue a shrine comes to mind. The Igbo have countless uses for shrines, from personal ones in the home to those used by the village as a whole. Personal "ikenga" shrine carvings, rather small, with distinctive horn-like projections, and the often large and formal "Alusi" public shrine figures are the most frequently encountered. It is the "Alusi" shrine figure that might be considered prototypical, if that is possible with an Igbo form. Both the personal and public shrines are used to make contact with the ancestors, and to appease potentially malevolent spirits, leading to relative social calm in an uncertain universe.

There are a few other artforms of note. A handfull of extraordinary masks from small sub-groups have become famous and eagerly sought-after, like the elaborate, tusked "Izzi" masks, the "water spirit" masks, with their bizarre colors and rhinocerous form, and the highly-abstract "Afikpo," with their numerous hornlike projections protruding outward from the face. Because the Igbo have existed in the area for so many centuries, there are even archaeological artifacts which have been recovered, like the copper-bronze "Owo" currency castings (Igbo-Ukwu), which might be up to 1000 years old. The Igbo, like most cultures in southern Nigeria, excel at weaving textiles, using colorful dyes and strip looms. Traditional symbols are often incorporated, though accurate identification of individual cloths is difficult.

History: The Igbo are an ancient people, and apparently originated within 100 miles of their current location. Though scientific opinions differ, it is possible that the Igbo and their ancient relatives the Yoruba, Idoma, Bini, and Igala existed as early as 5000 years ago, roughly about the same time as the rise of the ancient Egyptians. The Igbo split from these groups fairly early, arriving on the Akwa-Orlu Plain around 4000 years ago. Here they have thrived, despite the many internal squabbles which has produced so many regional and cultural differences. A vibrant culture yet today, with enormous political power which can border on tyranny, the Igbo continue to evolve, producing arts that defy the imagination and shock the senses. As mentioned at the outset, a full accounting of the Igbo and their artisitic prowess cannot be found in a single volume. But there are a multitude of resources both online and in libraries, where much more can be learned.