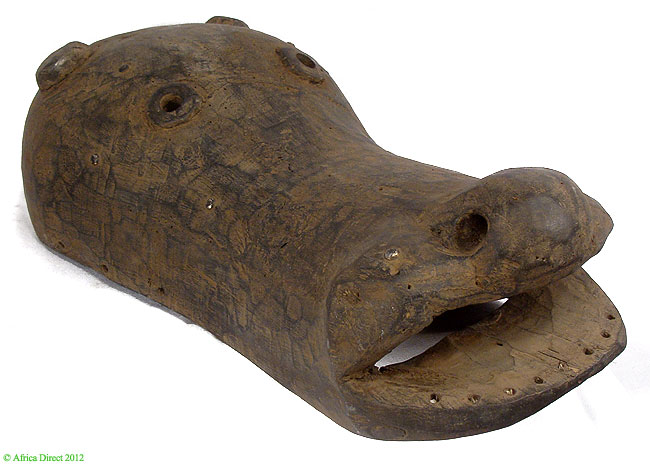 
Arts: The most well-known of the arts of the Ijo are the famed, abstract "water spirit" masks, which usually include a human-form face displayed amidst an array of references to important totem animals, like crocodiles and hippopotami. These masks are startling and fascinating, with levels of abstraction unique for an area known for the realistic depiction of the human form. Though their neighbors the Igbo craft similar water-spirit masks, the form certainly does not dominate their artistic output like it does the Ijo. Ijo water-spirit masks, usually worn on top of the head and extending horizontally, are used in a variety of functions, from ancestor worship, to religious and magical ceremonies. The realm of the water-spirits is important to the Ijo, who believe that is where both the unborn and the dead reside. They do use basic human forms, though these are found most-often on decorative panels instead of stand-alone statues. These panels serve a protective function wherever they are displayed. These are rare however, and found mostly in the western fringes of Ijo territory. Despite its relative rarity, the striking qualities of Ijo sculpture make it highly-valued by collectors and museums.

History: The Ijo can be traced back to the 15th century, their location along major trade routes allowing for early contact with Europeans. This also allowed contact with other indigenous groups living in the Delta. This gave the Ijo advantages over many of their neighbors, both culturally and economically. They functioned as intermediaries during the slave trade period, avoiding the fate of many of their neighbors, but of course they were complicit in this exploitation. Their production and use of colorful fabrics shows a definite European influence, and they are known for their elaborate fashions. Today many Ijo have relocated to the Port Harcourt area in search of jobs. The situation in the Niger Delta has been tense for many years due to the discovery of vast oil and mineral reserves in the area, and this has diminished the importance of traditional celebrations across all Delta peoples.