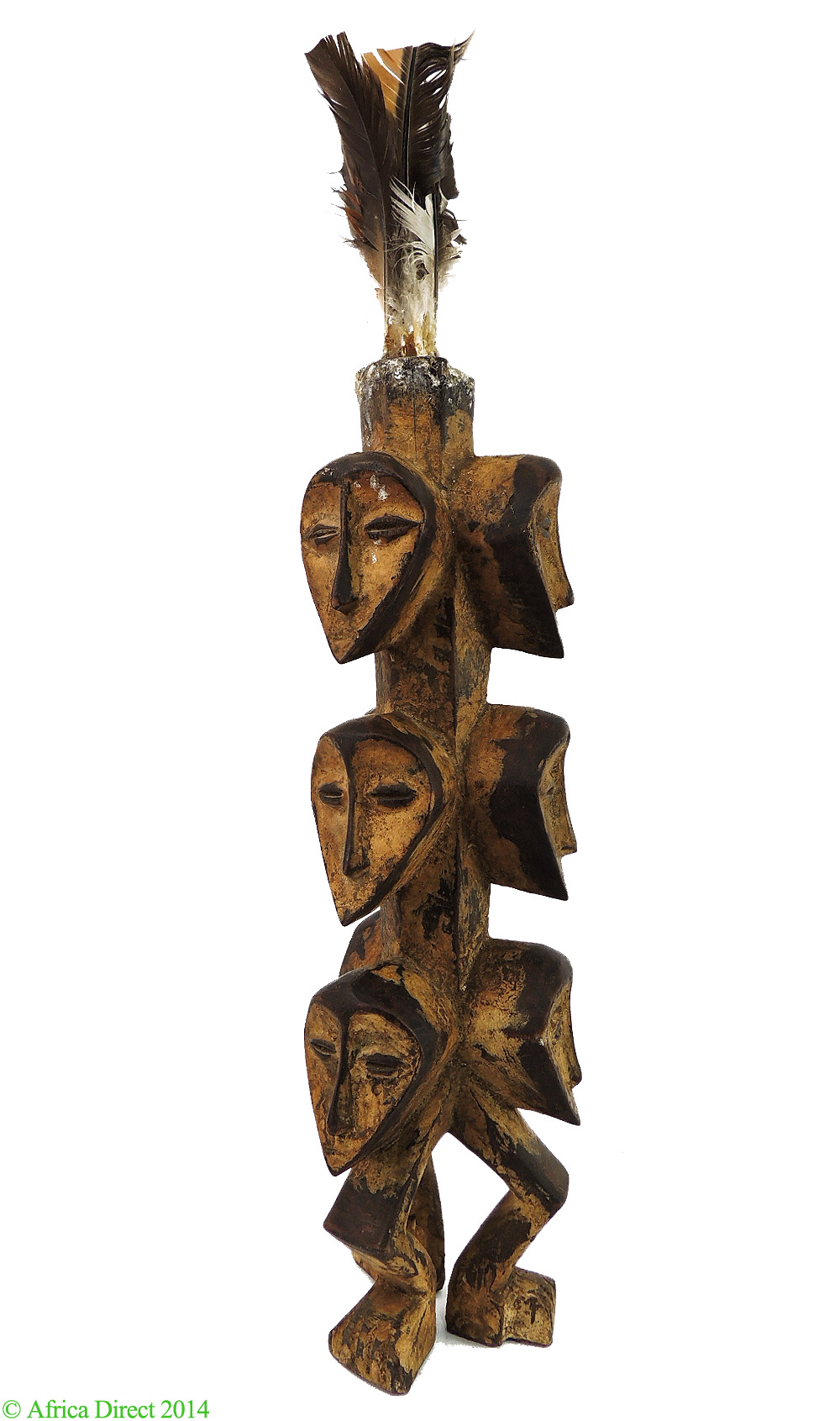 
Arts: Almost the entire opus of Lega art is used ceremonially by and for members of the "Bwami" society, which regulates nearly all aspects of Lega social and ritual life. Though limited to masks and small figures made from wood or ivory, the ability of the Lega artist to create an enchanting visual experience within a strict artistic tradition is legendary. This skill is even more surprising since the Lega do not consider the "beauty" of an object to be relevant. Only it's success in Bwami counts, with the definition of "success" being rather mystical. The masks are usually rather flat, with narrow, coffee bean shaped eyes, long flat nose, and a partially opened mouth. The overall effect is one of a naive charm, mixed with surprise. Masks can be plain, covered in kaolin, or decorated with small spots or incised dots. They are rarely larger than 13". Some of them are worn on the face, some on the arm, some on the waist, and others hung on fenceposts. Because the masks are carried from place to place and displayed outside, they often develop a stunning weathered patina. There are a few rare examples of small ivory masks. These can only be owned or worn by members of the highest level of Bwami, known as "Kendi." Other Bwami objects include small wooden statuettes known as "ikenga." These are roughly carved, with stubby arms, and the same charming abstraction and naivete found on the masks. The ivory statuettes that exist are some of the most prized and valuable objects in all of African art. Though small, many are exquisitely beautiful, developing a stunning buttery patina over time due to handling. They come in a surprising variety of forms, with or without appendages. These also can only be owned and displayed by kendi. There are few extant works by the Lega that are not Bwami-related. The strong artistic influence of the Lega on other Congo cultures leads to the misidentification of many pieces.

The Lega do not have a centralized government, so the Bwami Society has assumed an important local role in regulating Lega society. Though each individual village has a leader based on paternal ties, the true power is held by the highest ranking Bwami officials, who enforce strict codes of conduct, as well as endorse or deny individual advancement through the seven complex layers of Bwami. Though there is an extensive body of knowledge to master in order to move upward, Bwami also includes a patronage system which can exclude members who do not have the financial means or political ties needed to gain the favor of powerful leaders. It is definitely not a democracy. In order to reach the seventh level, or Kendi, one might have to fund the construction of a entirely new village just to host the formal ceremony. For a kendi ceremony, vast numbers of masks and small figures, considered especially powerful, would be carried to the new village, to be used to connect the initiate with the spirits. Ceremonies for lower ranking initiates would not be as expensive, and would use less powerful carvings. It is quite impossible for someone outside the Bwami to fully understand such a confounding process, but it does seem to promote stability within each village, despite the inequities which appear so obvious. Lega art holds a special place in the hearts of collectors, with the finest pieces being among the most irresistable of all ritual objects.

History: The Lega began their migration into the Congo, from what is now Uganda, in the 16th century. They were fierce warriors, and they assimilated many cultures along the way. Thus much of Congo culture that exists to the east of the Luba will show Lega influence in their societal practices, as well as in the styles of art they produce. The civil chaos in the eastern Congo during recent years has not yet significantly affected the Lega, and they continue to be a powerful force in the region.