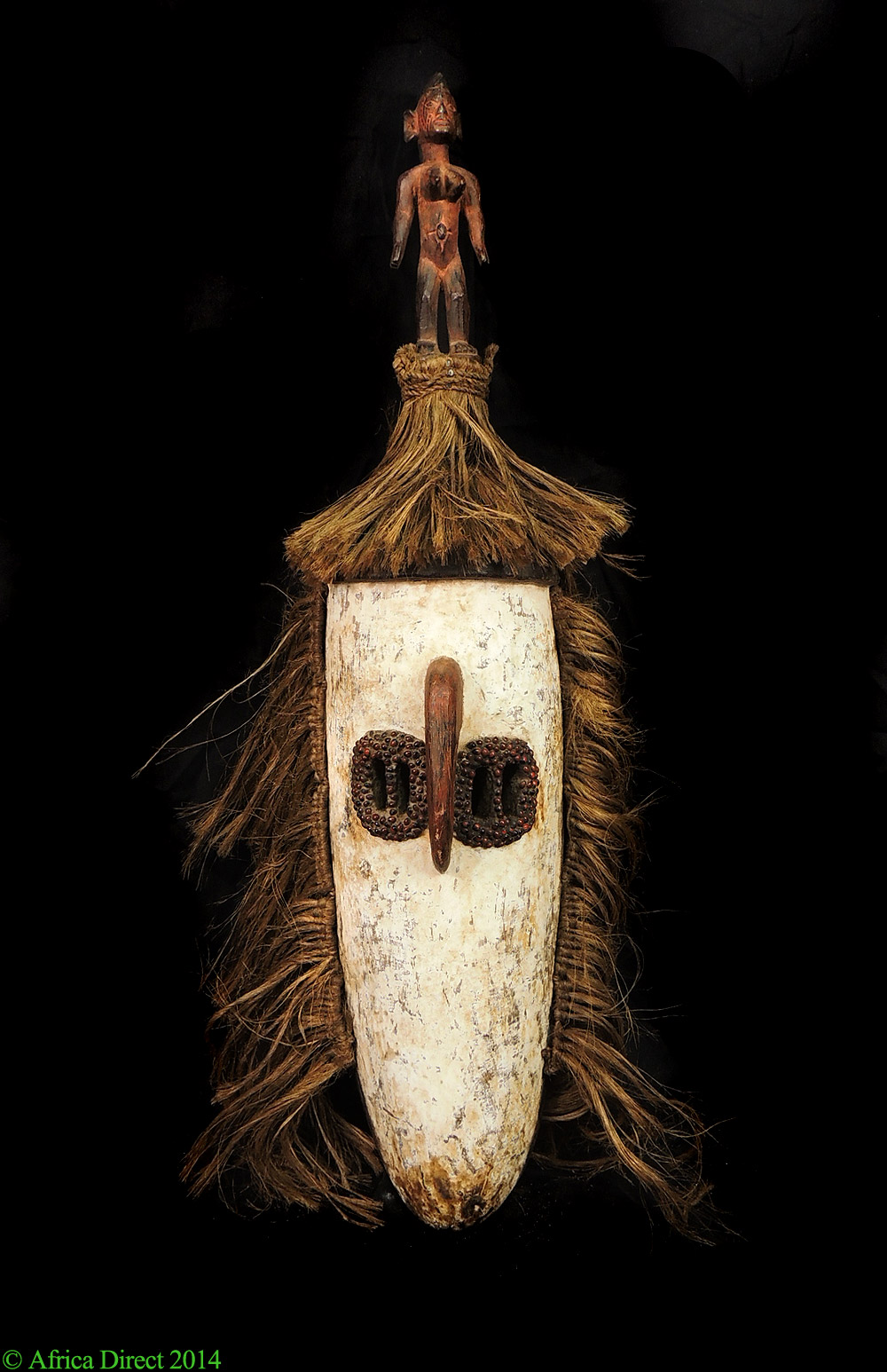 Arts: The Mossi are the largest and most powerful culture in Burkina Faso and have a rich masking heritage. Identification of Mossi masks can be a challenge, as they mix freely throughout their territory with a number of other groups, like the Bwa, Bobo and Nuna, who use similar artforms. Like their relatives, the Bobo, the Mossi consist primarily of farmers. Since they live in a hostile region of arid savannas, the Mossi have developed an elaborate series of purification rituals in order to insure adequate rainfall. Masked dances have the essential function of mediating evil, and reinstating a balance between sun, earth, and rain. At the end of the dry season, prior to the harvest, purification ceremonies take place, using impressive masks of fiber and wood, carved into forms representing the totemic spirits of the village: warthog, male buffalo, rooster, hornbill, fish, antelope, serpent, and hawk. Together they incarnate the forces of fertility, abundance, and growth. Among the Mossi, the sacredness of the mask derives from the fact that magic forces are considered to be present in the mask, and through it, to be acting on the behalf of the villagers. The distinguishing element of Mossi masks is the absence of human features, other than round holes for eyes. The "face" often consists of an oval, kaolin-covered blank space, with a vertical, notched ridge separating the surface into halves. The upper portion of their masks is another matter, and can consist of fantastic superstructures which can consist of human or animal figures, or both. There can also be tall and impressive geometrically-incised planks, rising sometimes to great heights. This is where confusion between groups can come into play, as styles coalesce between groups, all of whom employ plank masks. While not unknown, free-standing statues of the Mossi and their neighbors are rare, but can be extremely beautiful and expressive. They are thought to be representations of ancestors, but their use is poorly understood. For a definitive study of the arts of Burkina Faso, you can consult the work of Christopher Roy of the University of Iowa, which is by far the most exhaustive work about Burkina art in the literature.

History: The Mossi states were established in the 15th century after bands of Mossi horsemen moved north, out of an area which is now northern Ghana, conquering less powerful cultures, like the Dogon, Nuna, and Kurumba. The first Mossi emperor was Moro Naba, who reigned from Ougadougou, which is the modern-day capital of what is now known as Burkina Faso, formerly Upper Volta. For almost 400 years the Mossi ruled effectively, even resisting the invasion of the Muslim Fulani, who were rarely challenged in their southward expansion. In 1897, the first French explorers arrived in the area, and established colonial rule. During French occupation the Mossi were heavily exploited for labor, transported, essentially as slaves, into the rice plantations of what is now Cote d'Ivoire. It was only in 1960 that the country of Burkina Faso gained its independence from the French. Since that time, the Mossi have been a dominant force in Burkina politics, and their influence runs throughout the country, not only politically but artistically, resulting in an inevitable merging of styles throughout the country.