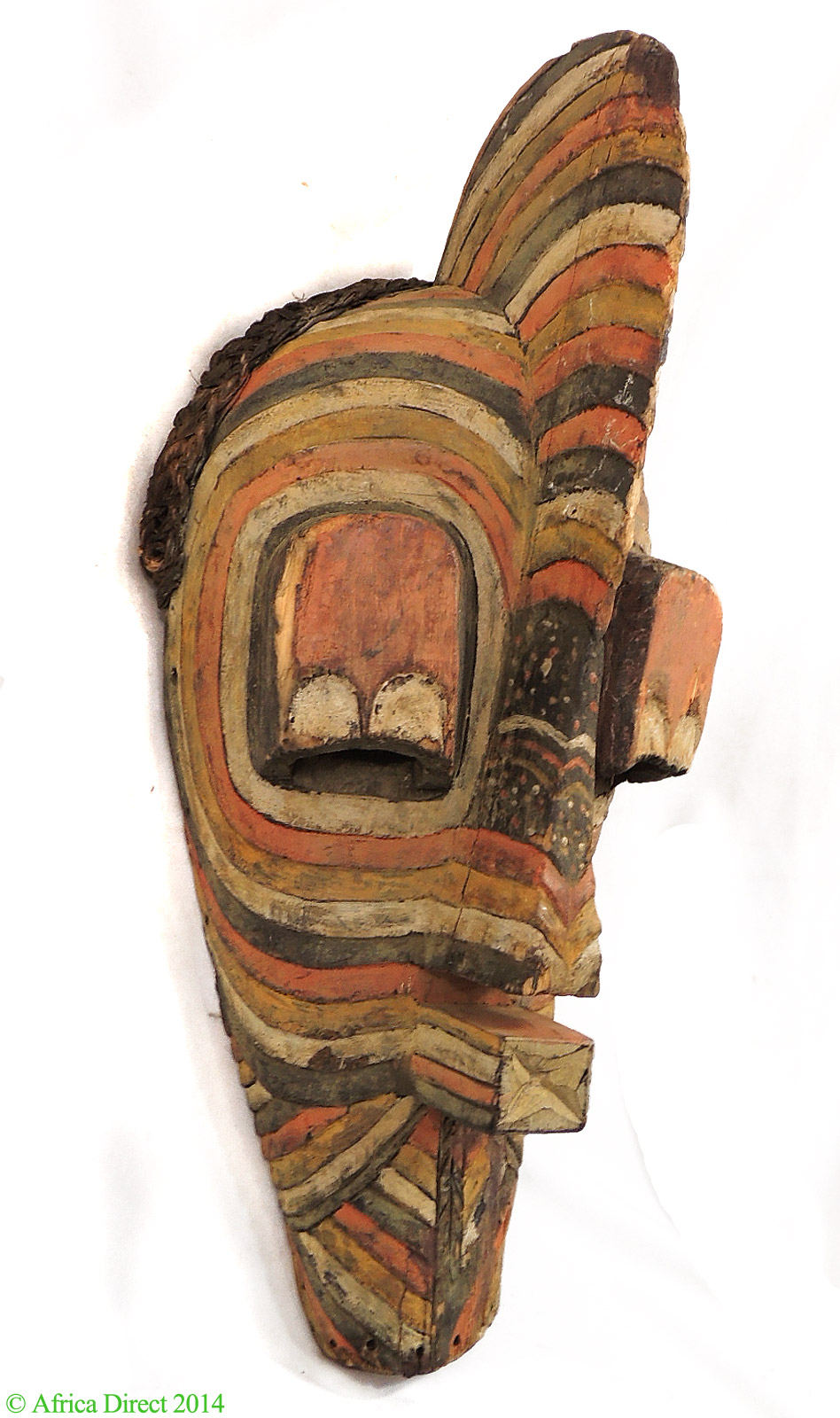 Arts: The distinctive art forms of the Songye are universally admired, with major collections and museums having at least one example. The actual number of forms is somewhat limited, with masks and power figures dominating. There are smaller prestige carvings of great beauty, however.

When one thinks of the Songye, an image of a "kifwebe" mask comes immediately to mind. These are among the most sought-after of all indigenous African artworks, combining quasi-cubist, abstract elements with striking striated contrasts of color and texture. These masks are used in conjunction with ceremonies of the "Bwadi Bwa Kifwebe" secret society, which serves to counterbalance the power of local rulers, the "Sultani Ya Muti," who control the distribution of land to the villagers. "Kifwebe" masks can be male or female, with crested superstructures identifying male masks. The higher the crest, the more powerful the mask. Male and female masks are danced together, with each dancer encouraging the desired qualities of the sexes. The male dancers, adorned with their high-crested kifwebe and bodies hidden by straw, display aggressive, uncontrolled behavior, a sort of "reverse psychology" attempt at social conformity. The dancers wearing female masks perform more gently and even seductively, in a display linked to fertility. Kifwebe masks can vary in size from six inches, the so-called "passport" masks, up to 20 inches for the formal dance masks. In addition to masks, the familiar kifwebe image can be found on grooved crests with a central mask-like image, as well as on formal statuary.

Aside from a few rare seated maternity figures, almost all Songye statues have "magical" purposes, more aligned in use and appearance with Kongo figures from the north than with their close relatives, the Luba. They usually are of male form, with a familiar Songye face and hands on a distended abdomen. They can range from small figures of around 4 inches, used for personal/family protection, up to 60 inches for figures designed to "guard" an entire village. Like the "nkisi" of the Kongo, Songye magic statues can have an array of attachments, called "Bishimba," which give the piece its "power." The top of the head often will have an animal horn inserted point down, with the hollow portion used to hold powders and other special ingredients. The face of these objects sometimes have tacks or strips of metal applied. The interpretation of this runs from references to smallpox to the attraction of lightening bolts to attack an enemy or evil spirit. The actual use of the larger figures is confined to the "Nganga," a diviner of sorts. He might add any number of additional items to the piece to achieve the desired effect. As a result, the phrase "over the top" can often be used to describe fully-empowered Songye statues. These startling figures are most often handled during the new moon.

The Songye do craft a number of smaller, so-called "presige" objects, including figural stools, neck rests, and staffs. Their skills at working with metal are also well-known, with rings and other jewelry items, as well as elaborate copper axes and adzes well-documented and prized by collectors. Songye pieces occupy a special place in the history of African art, and the many striking differences between their arts and those of the Luba still defy a satisfactory explanation.

History: The Songye and Luba share a common mythical ancestor known as "Kongolo," and their history can be traced back almost 500 years. The founders of the Songye are thought to have originated in the Shaba province, an area littered with small lakes. This happened to be in the heart of the old Luba Empire. Domination by the Luba led them to relocate to their present homelands, on the left bank of the Lualaba River. The Songye are dived into almost 40 clans, ruled by a dominant chief, the "Yakitenge," who issues strict edits for social conduct. According to Bacquart, this includes "not showing grief, not drinking in public, and not shaking hands with men." Under the primary authority of this chief there are the locals rulers, who help to enforce his rules and maintain his power. These local chiefs also have the responsibility of dividing land up between the clans and their individual villages. As stated earlier, the Bwadi Bwa Kifwebe society helps mediate the inevitable stress of this strict authority by taking charge of festivals and other socially important events, a kind of judicial buffer which enables each village to achieve some measure of harmony. The actual dancing of the famed Kifwebe masks today is limited to the southern portions of their territory.