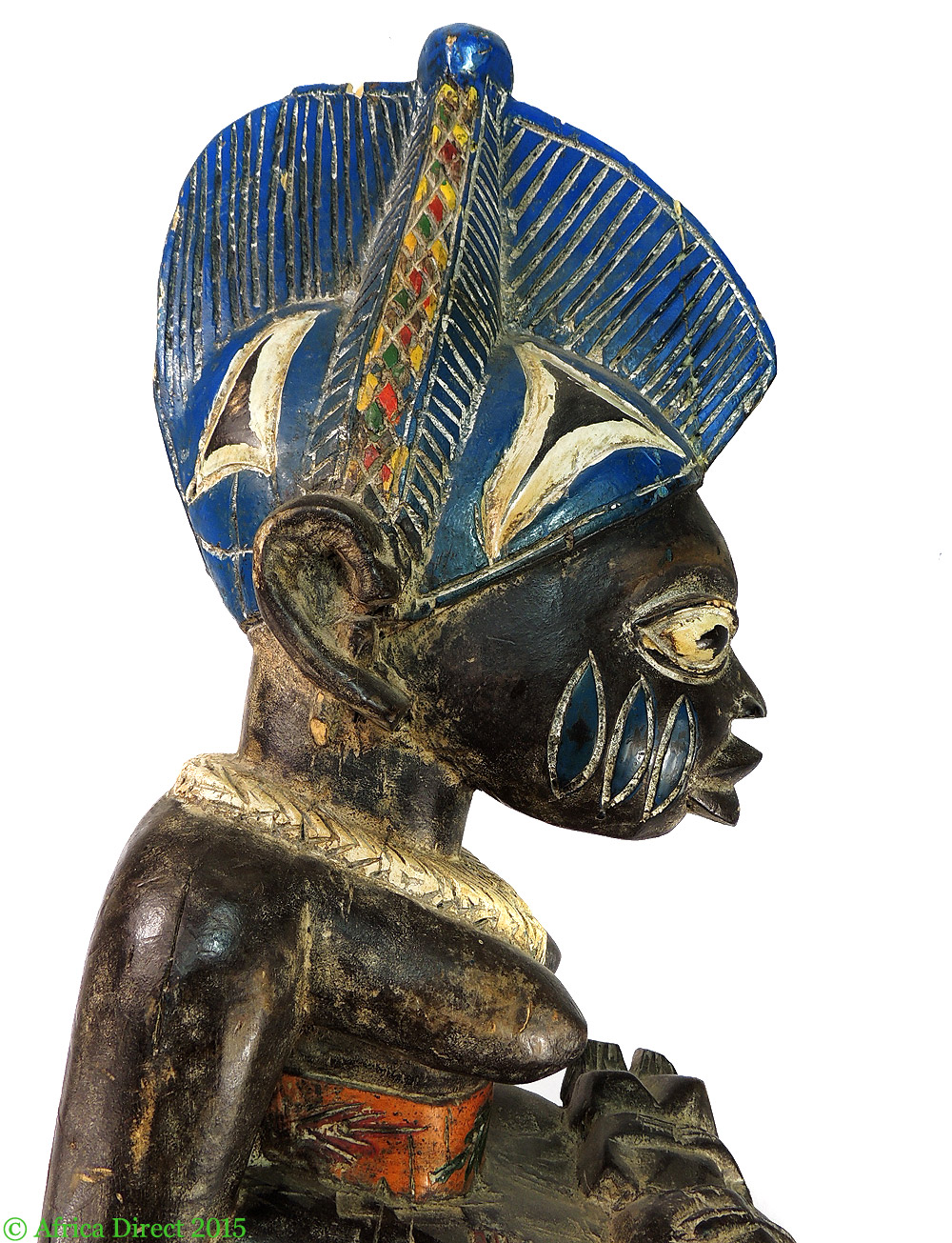 Arts: Yoruba beliefs and rituals, gods and spirits, with their blithering array of cults and secret societies, all of which use arts as an integral part of their practices, cannot be covered adequately in a concise format. Therefore, only the most famous of their countless art forms will be explored here. For an exhaustive accounting, with fabulous pictures, see YORUBA-THE ART OF LIFE-THE BENNETT-LUTHER COLLECTION, by Dr. Daniel Mato . The Yoruba use a wide array of masks, from the simple face mask, with the characteristic triple scars carved into the corners of the mouth, to the extravagant, extraordinary creations like the "Gelede" and "Egungun" cult helmet masks. They carve wands and other lovely objects associated with the "Shango" cult. There are the famous small "Ibeji" twin figures, known worldwide, an array of beaded objects, from large and extravagant to small and utilitarian, and impressive multi-purpose metal castings. Of course, there are other objects, too numerous to discuss or define. In fact, the explanation of many Yoruba pieces is quite impossible, such is the diversity of their use and significance from village to village.

In the western Yoruba-speaking areas, the "Gelede" cult has a significant following. The cult honors the power and wisdom of elderly women, and venerates them by holding dynamic celebrations featuring dancers wearing colorful helmet masks and headdresses. These elaborate pieces have a human face painted in vivid colors. Some of the masks have elaborate superstructures as well, showing various forms of human activity. Gelede masks are remarkable and prototypically Nigerian, and highly-prized by collectors.

The "Egungun" masks, used primarily in the Egba and Egbado areas, are worn during "Odun Egungun" festivals, held in various communities to venerate the ancestors. Egungun festivals feature dances of masked individuals, and are held once or twice a year, and also for the funerals of important individuals. These colorful ceremonies include special offerings to the ancestors, insuring their positive intervention in the future. A range of themes are depicted in Egungun masks, from the symbolic to the satirical, and they run from straight-forward human face forms, to remarkable, over-the-top creations with vibrant colors and huge superstructures. Dance themes can depict serious subjects such as social and moral norms, to more light-hearted, satirical performances with a variety of meanings from village to village, imparting education at the same time as they entertain.

Shango (Sango) was the mythological name of the fourth Yoruba king. Myth holds that he was deified, and from ancient times he has been associated with lightning, symbolized by the double-axe design seen on Shango cult objects. Women carry these wands at annual ceremonies, during which a wide variety of Shango-related artworks are displayed. Fine examples of Shango wands exist and can be found in the most important collections.

The Yoruba are known for having an extraordinarily high rate of multiple births. The rate of twin births is one of the highest in the world, 45 of every 1,000 births (in the United States it is 28.9 of every 1000). There is also a high mortality rate: half of the twins die shortly after birth. In earlier times, new-born twins, or "ibeji," were believed to be evil, monstrous abnormalities, and infanticide was a common practice. However, by the middle of the 18th century, twins came to be seen as a blessing, and were awarded "minor deity" status, and were known as "Orishas." By the 19th century, the cult of the Ere Ibeji was firmly established, and is practiced to this day. The death of one or both twins is a great calamity for the family, one which requires immediate appeasement of the deceased child's soul. Though the cause of the high rate of twins among Yoruba women has not been established, the village grieving process is well-known, and results in the carving of a figure known as "Ere Ibeji," which represents the lost child, serving as a medium for contact with the soul of the deceased. The figure is given to the grieving mother, and placed on a family shrine. It is treated as much like a real child as possible, with ritual feeding and even on occasion dressing the figure in similar clothes to the living twin. The carving might also be bathed in special oils, prayed and sung to. Yoruba Ibeji twin figures, though variable in quality, are among the most sought-after of all West African objects.

The striking, cast-iron gong currencies of the Yoruba are some of the best-known of West African metal works. They exist in many forms and varieties, from large groupings to single pieces like bells, gongs and posts with bells or gongs as finials. Though they are functional, they became a topic of interest to collectors primarily because they were also used as money for important transactions.

History: Yoruba history is a complex mixture of fact and mythology. Oral history tells us that God lowered a chain at Ile-Ife, down which climbed Oduduwa, the ancestor of all Yoruba. He brought with him a rooster, some soil, and a palm nut. He threw the soil into the water, the rooster scratched it (how he did that is curious), and the palm nut grew into a tree with sixteen limbs, which became the original sixteen Yoruba kingdoms. It is here that documentation leaves the mythological and enters the recorded. The Oyo Empire rose to power in the 15th century with the aide of guns obtained from Portuguese colonialists. The acquisition of horses helped the process along, and was responsible for the rapid expansion into new lands. When war broke out in the Oyo Empire, late in the 18th century, the Yoruba sought aide from their Muslim neighbors, the Fulani, from whom they probably got most of their horses. The Fulani, perhaps the most aggressive of all African cultures, responded, predictably, by conquering the Oyo, and displaced the Yoruba southward. Thus the towns of Ibadan and Abeokuta were founded, providing the Yoruba with seats of power. The various factions of the Yoruba, who fought with each other, were unified by a treaty in the late 1800's which was mediated by the British. This led to formal colonization by the British in 1901. The British, badly outnumbered, wisely allowed the various Yoruba factions to essentially establish their own governments, though the British maintained their "official status." Finally, in 1914, after a violent uprising, mostly by the Yoruba, the British released southern Nigeria from their grip, but it was not until 1960 that the whole of Nigeria was declared an independent nation. The Yoruba have since flourished and grown into the largest unified culture in Nigeria and, debatably, the largest in all of Africa, as well as one of the most prolific art-producing cultures in the world.