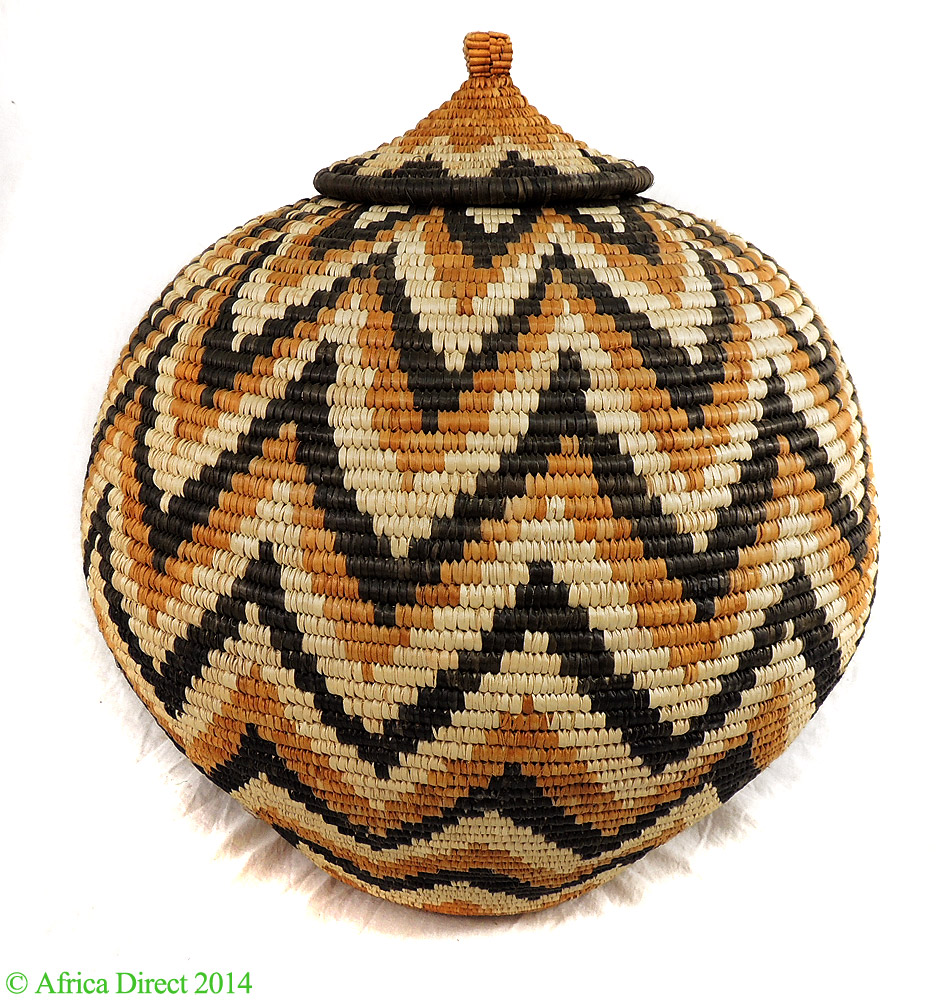 Arts: The famed artistry of the Zulu lies primarily in their skills at beadwork, and the weaving of remarkable baskets and textiles. These objects display an amazing array of colors, and an ingenious use of available materials. Though a number of famous wood carvings have been attributed to them, these are still of questionable origin. The Zulu do produce utilitarian objects out of wood, primarily spoons and bowls, which are highly-prized and ritually important within individual families.

Baskets made by the Zulu have been famous for many years, and are considered among the finest in the world. They combine fine abstract patterns with an extraordinarily tight weave, capable of storing even liquids, like beer. Beer baskets, some of enormous size are, in fact, the most famous baskets of the Zulu, and are sought-after by collectors, decorators, and galleries around the world. Zulu baskets can take on many forms and sizes, are ceremonially important, and are cherished possessions of both men and women. They are made from the young leaves of the Ilala palm (Hyphaene coriacea), and larger baskets can take over a month to make. For contrast, they use dyes made from roots and bark, and even battery acid. The traditional role of these baskets is not only for rituals, like funerals and ancestor worship, but also a primary source of income for rural families. A new and exciting form of basket-making has emerged over the last 40 years, using colorful rubber or plastic-coated telephone wire in place of, or over, the traditional Ilala splint. Known as "mbenge" in their native tongue, this has not only allowed the Zulu to express themselves with new colors and designs, but has added another important source of income.

In addition to baskets, the Zulu are also skilled beadworkers. Beads are used not only on market items made for sale, but on items of clothing used for daily wear, and special events like weddings. There are elaborate beaded women's hats, necklaces and aprons, as well as stunning beaded vests, worn by powerful men and diviners.

Wood carving, though a minor art form, still has an important role in Zulu society. Simple but elegant wooden spoons, each with their own basketry container, hold an especially revered place. The arrangement of spoons around the communal food dish has to be exact, and it is bad luck to leave one standing in the bowl. Special sets of spoons, carved by men only, are made for presentation to new wives. These spoons accompany the gift of a goat, and are essential for a proper marriage in households with more than one wife. The goat is known as "the goat of the spoon." Wood is also used for bowls and platters which are rarely decorated. There are several famous figural wood carvings attributed to the Zulu, but most modern scholars are now skeptical about their origin.

History: The AmaZulu are thought to be the descendants of Zulu, who was the son of an Nguni chief then living in the Congo Basin. They are of Bantu stock, and migrated south during the 16th century, brutally conquering peoples along the way. They incorporated into their language the distinctive clicking sounds made by the San bushmen, whose ancient homelands they had invaded. This forced many of the San westward into the deserts of modern-day Namibia, where most remain today. Modern Zulu history essentially begins with Shaka Zulu, the third-born son of Senzangakhona, who in 1816 launched his brutal series of conquests which established the Zulu as the major military power in the region. The territory over which Shaka reigned at the time of his assassination by his brother Dingaan in 1828 was truly vast, having expanded from 100 square miles to 11,000. Dingaan then became ruler but was killed by the Boers at the Battle of Ncome in 1838. The Zulus won the battle, however, and Cetshwaya, Dingaan's brother took the reigns. The next major confrontation was in 1879, when the Zulu defeated the badly outnumbered(and outwitted!) British in the Battle of Isandlwana. Though they won this battle, the British military rapidly consolidated their power, and in 1887 they annexed Natal, which was to become what is today ZwaZulu-Natal.